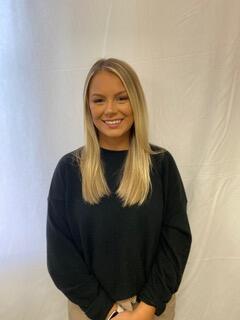 The competition involved more than 2,000 students from eight countries who showcased their sales skills by selling laptops to an AI bot.

“I knew what to expect in terms of my final score as I practised before the competition until I received my highest possible score; however, I had no idea I would do so well to rank as the top international competitor -- especially with so many participating students,” said Gibson.

Students in the RNMKRS sales training program use a free online tool to assist with learning, practising and demonstrating selling skills by speaking with Alex - an artificially intelligent customer bot - who listens and responds to their input.

Faculty member Cheryl Williams said this is the first time students in her third-year Rhetoric and Persuasion class have participated in the competition.

“One way my students usually practice their persuasion skills is through role plays with partners,” said Williams. “But with the move to an online format, traditional role plays weren’t ideal.”

Williams wanted an opportunity for students to practice their skills in a way that could be enhanced, rather than hindered by online delivery, and that’s when she came across RNMKRS.

“Brianna went into the competition prepared with a plan for how she would handle each step of the sales process,” added Williams. “In fact, she completed 25 practice role plays to prepare for competition day. In the end she scored higher than 95 per cent of students representing schools ranging from Purdue to Harvard. She represented Conestoga - and our country - well.”

In addition to finishing as the top international competitor, Gibson also scored in the top 5 per cent of all students in the competition.

Conestoga's Bachelor of Public Relations degree program was the first to be approved in Ontario and the fourth of its kind in Canada. Graduates are prepared with critical thinking skills and the practical experience required to manage reputations, responses and relationships on behalf of their organization.