Saifullah Muhammad: Journalism graduate will be the voice of his people

Through his advocacy work, recent Conestoga Journalism graduate Saifullah Muhammad speaks with the Honourable Bob Rae, former Ontario premier and former interim leader of the Liberal Party of Canada, and now Canada’s Special Envoy to Myanmar, almost daily. He’s met with Minister of Foreign Affairs Chrystia Freeland too many times to count, and he’s had the opportunity to sit down with Prime Minister Justin Trudeau on three occasions. 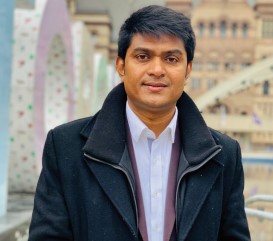 Saifullah Muhammad graduated from Conestoga’s two-year Journalism diploma program making him the first Rohingya to be professionally trained as a journalist.

All this, and Muhammad, a Rohingya refugee, has only been in Canada since 2016. Now, with the Conestoga credential he received at spring convocation, he also has the distinction of being the very first Rohingya to be professionally trained as a journalist.

The Rohingya are members of the Muslim minority in Myanmar. More than 700,000 fled to Bangladesh in 2017 alone following the Myanmar government’s most brutal genocidal campaign against Rohingya civilians to date, which according to a UN report, “brutally and systematically violated the human rights of ethnic minorities throughout the country.”

In Bangladesh, more than 1 million Rohingya remain stateless and homeless, and live with the trauma of the violence they have encountered.

Muhammad described the situation as dire. His own parents have lived in a refugee camp since 1992, but he managed to leave the camp to attend school, secured a scholarship for a university in Thailand, and later moved to Malaysia where he taught at a UN school. Mohammad is fortunate despite living in a refugee camp for 15 years: most youth in the camps have no access to education.

In 2006, the first few Rohingya families arrived in Kitchener. Since then, many others have settled in the city in an effort to stay together and share a common culture.

Muhammad estimates more than 300 of the nearly 500 Rohingya refugees living in Canada call Waterloo Region home, with the vast majority seeking skills training at Conestoga. He believes approximately 50 Rohingya youth have either graduated or are enrolled at the college.

Like Muhammad, other students from his community have fled violence, and most still have family members living in refugee camps. Collectively, they want the world to know what’s going on in their community, but of the 3.5 million Rohingya, not one holds a journalism credential.

“Originally I wanted to study English, but I had community leaders around the world encouraging me to pursue journalism. We have many citizen reporters. Some Rohingya youth launched Rohingya Vision TV and received training from AP on how to write basic news stories, but none were trained professionally,” said Muhammad.

Enrolling at Conestoga provided Muhammad the opportunity to develop skills to help shed light on the ongoing refugee crisis. And he did this while also serving as an advocate for his community.

He writes a blog, has co-authored an editorial in the Toronto Star, lends time to other associations and agencies, and consults frequently with the Canadian government to support its response to the Rohingya crisis.

He helped found the Canadian Rohingya Development Initiative, held a rally in Toronto that welcomed 10,000 supporters, and has been invited to speak at the House of Commons and the Senate, the UN General Assembly, the European Parliament and an education conference in Dubai.

He’s also a father of two and is committed to supporting Rohingya youth. He hopes to bring students here so they can contribute positively to Canadian society and wants to establish scholarship funds for his community both here and abroad.

“It’s not a burden,” said Muhammad when asked about the pressure he may face as the voice of his people. “We have everything here, but our brothers and sisters need our voice. I’m trying to give back to my community and it’s a pleasure to do it.”

Speaking engagements and advocacy work left little time for Muhammad to focus on his studies, but he managed to meet his deadlines and thanked Conestoga faculty member Larry Cornies for his guidance and encouragement.

“I think faculty feel a responsibility to all students, regardless of their age or background or intention,” said Cornies. “But it’s a rare thing to come across a student as passionate as Saifullah about the power of journalism to inform, motivate and help solve big problems. Good students bring out the best in their teachers and so, yes, I certainly felt an extra obligation to help him achieve his aims, given the importance of his cause and how focused he was on it.”

In addition to sharing their stories, Muhammad would also like to bring peace to his community and has been accepted into the University of Waterloo’s Master of Peace and Conflict Studies program. He credits his success at Conestoga for helping him gain admission to the program.

“I can’t imagine that after living my whole life as a refugee, being a newcomer to Canada, working consistently for the community, supporting family and travelling to different places to speak at conferences about the Rohingya people, that I would be able to maintain good grades in the program. However, at the end of my studies at Conestoga College, I feel an immense feeling of pride and accomplishment.”

Saifullah Muhammad graduated from Conestoga’s two-year Journalism diploma program with distinction and was listed on the Dean’s honour list. He was also named the winner of the Waterloo Region Record student award for Most Dedicated Journalist.

“I have no doubt that Saifullah will achieve his goal of becoming the first professionally trained journalist from his community to report on the crisis it faces,” said Cornies. “In many ways, he has already achieved that. Once his journalistic training is paired with graduate work in peace and conflict studies at UW, his voice and profile will become even more influential, despite his soft-spoken manner. I hope the world hears it.”

This article originally appeared in the fall 2019 edition of Conestoga’s Connections: Building Communities and Careers. The magazine includes profiles of new and expanded campus facilities and initiatives, while highlighting some of the outstanding students, employees and friends who contribute to the success of the college and the broader community.