Students in Conestoga’s Women in Skilled Trades (WIST) program were left speechless on December 12 when they received an unexpected Christmas delivery from Freshco Retail Maintenance. Representatives from the boutique retail facilities firm dropped by the Waterloo campus to present each of the 25 students in the program with a $500 cheque to offset their living expenses. 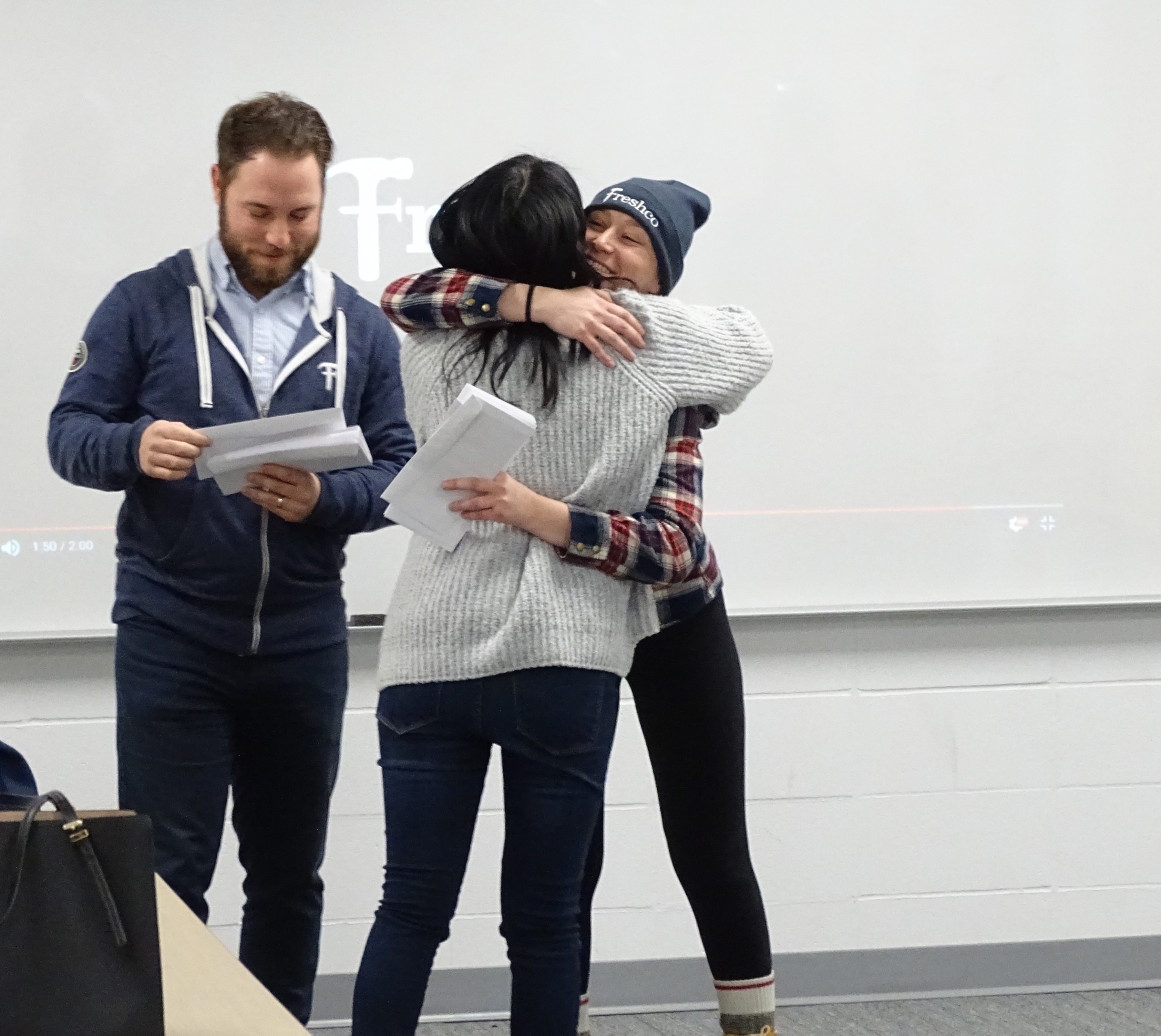 Freshco president Jamie Masson and WIST graduate Brianne McKee, now a Freshco employee, surprised each WIST student with a $500 cheque on December 12 at the Waterloo campus. The gifts represent Freshco's commitment to helping women succeed in the skilled trades..

“It’s to make more young women, middle-aged women, older women — you name it — as successful as we can in this industry,” said founder and CEO Mandy Rennehan in a message she recorded for students explaining her motivation behind the gift. “It’s because we need more role models. We need you to be successful; we need to help you set up for success.“

Known as the Blue-Collar CEO, Rennehan has built Freshco into a multi-million dollar business with clients like Tiffany & Co., Crate & Barrel, GAP and Urban Outfitters. She is a passionate advocate for the skilled trades and women in the trades, and speaks widely on the topic of the trades shortage in Canada. She was named Atlantic Business Magazine’s 2019 CEO of the Year, received the 2018 Business Leader award from the Toronto Region Board of Trade, was named one of the top 25 Women of Influence for 2018, and has been inducted into the Women’s Executive Network’s hall of fame after receiving its Top 100 award for the fourth time.

Rennehan has been delivering the annual gift to WIST students since 2016, and she joins members of her team frequently at the college to mentor WIST students and participate in Conestoga's Jill of All Trades and Trades and Technology events which give young women in high school a chance to explore careers in the trades.

“We are absolutely honoured and proud to be here to help support the women in trades,” said Frescho president Jamie Masson. “As Mandy said, she wants to see more women working in this industry. You are the start of that, and we are so proud to be here to give you a little gift.”

Brianne McKee, a WIST graduate, joined Masson for the cheque presentation. McKee met Rennehan two years ago during one of her visits to the college and was drawn to her personality and energy. McKee is now one of three WIST graduates working with Freshco.

WIST is a tuition-free program funded by the provincial government to support low-income women who are unemployed or underemployed prepare for careers within the construction sector as a general carpenter with the basic skills required to secure a position as an apprentice. The 34-week program includes 26 weeks of in-class practical theory and hands-on experience and includes a paid eight-week work placement.

Visit the School of Trades & Apprenticeship or email ETT4W to learn more about women in trades.