Condors name Athletes of the Year 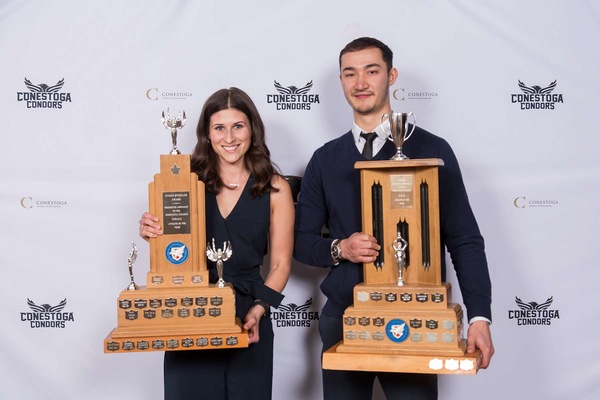 Amanda Hutchings, a student in the Mental Health and Substance Abuse - At-risk Populations program, was named Female Athlete of the Year. A two-sport athlete, Hutchings demonstrated great athletic ability as a member of the cross country team, qualifying to race at nationals. Hutchings also competed in mixed doubles badminton.

“It means so much to me to win Female Athlete of the Year and I am truly honoured and proud to be a Condor,” said Hutchings. “I had incredible coaches as well as supportive and hardworking teammates -- I feel so grateful to have had the experience to grow as an athlete.”

Wesley Lau, a student in the Bachelor of Applied Technology - Architecture - Project and Facility Management program, became one of the most decorated student-athletes in the college’s history. A member of the men’s varsity volleyball team, Lau was named Male Athlete of the Year for a third time and team MVP for the fifth year in a row.

“Winning Male Athlete of the Year means that I have achieved my goal in successfully giving my all to my team, and represented Conestoga athletics as best I could,” said Lau. “I want to thank all my teammates, coaches and behind-the-scenes personnel that helped along the way -- it is a perfect way to end my career.”

Lau is the first Conestoga student-athlete to surpass the 1,000-career point mark, and earlier this year, was named the OCAA Men’s Volleyball Player of the Year, OCAA West Division First-Team All-Star and OCAA West Division Scoring Champion with an average of 5.1 points per set in 16 regular season matches. Throughout his career, Lau has received varsity athletic bursaries as well as a CSI-sponsored sports scholarship, and in 2018 was a Canadian Collegiate Athletic Association (CCAA) Academic All-Canadian award recipient. As CCAA’s most prestigious student-athlete honour, the award recognizes commitment to academic success and athletic achievement.