Last October, Google announced its acquisition of FameBit, a technology platform founded in 2013 that helps content creators and brands find and work with each other through sponsorships and paid promotion. Five Conestoga graduates provide software engineering expertise for FameBit and will depart later this month for Mountain View, California to work with Google’s YouTube team as part of the acquisition. Mountain View is home to Google's global headquarters and its largest campus. 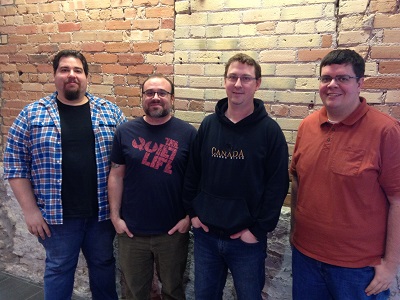 The team of graduates is led by FameBit’s vice president of software engineering, K. Michael Carpenter - a 2002 Conestoga Computer Programmer/Analyst graduate - who recruited David Ipsen, Jon Eby, Joshua Magashazi and Julian Uhrig to support FameBit’s software engineering team. The group was required to demonstrate its skills to Google prior to the acquisition.

“It was like writing four exams in one day,” said Magashazi when he recalled the round of technical interviews that were conducted by Google. “And we had to do it on four hours of sleep.”

The group was flown to California for the interviews, but an unexpected series of flight delays meant they arrived with just hours to spare before their meetings. “We spent the entire day solving problems, but that’s what we were trained to do,” added Magashazi, who, along with Eby, Ipsen and Uhrig, completed Conestoga’s Software Engineering Technology program.

Magashazi credited Conestoga and its project-based learning for preparing him for his role at FameBit, and added that he found the design of the program helpful. “I spent two years in class and then completed four co-op terms back-to-back. You go in to your placement with skills you can use and you have time during the placement to start projects and see them through to completion.”

When reflecting on his time at Conestoga Eby said he appreciated the freedom faculty gave him with projects: “There might be one end result, but faculty was open to letting us explore different pathways to get there.”

Google’s acquisition of FameBit was announced in an October 11 blog post by Ariel Bardin, Google’s vice president, product management: “We believe that Google’s relationship with brands and YouTube’s partnerships with creators, combined with FameBit’s technology and expertise, will help increase the number of branded content opportunities available, bringing even more revenue into the online video community.”

The five graduates are all originally from the Waterloo region and have received support from Google to coordinate their move to California. Until now, the group has been working in offices at Workplace One in Kitchener, situated next to Google’s Kitchener offices.

“We haven’t forgotten that there are Google offices right next door,” said Carpenter when asked if he would return to the region. “We’re excited about the move and the opportunities in California, but you never know, we might be back.”

Conestoga's Software Engineering Technology three-year advanced diploma program is recognized as one of the top programs of its kind in the province. Working with a variety of computer languages and environments, students develop skills and knowledge that qualify them for careers in the software industry. Courses cover database development, internet development, embedded systems, smartphone/tablet development, computer graphics, computer security, software quality and game programming.