More than 250 guests sampled the flavours of Mardi Gras at Conestoga’s fifth annual Iron Chef  Waterloo Region competition held February 4 at Bingemans. The event pairs Culinary students with top chefs from the region to create innovative dishes in order to win votes from guests and a panel of judges. 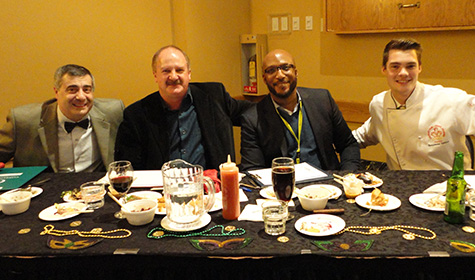 Described by Gary Hallam, executive dean of Conestoga’s School of Business & Hospitality, as a live learning lab, the competition provided students with a chance to partner with local chefs and to work in the kitchens of the region’s best restaurants.

“This is great opportunity for students to be inspired by the industry,” said Conestoga’s chef Philippe Saraiva. “Students have said thank you for pairing them with these chefs because they have learned so much. It’s also great for the industry because they get to see what we teach at the college and get a sense of the skills the students already have.”

Saraiva also applauded the students for their energy and enthusiasm despite having put in long hours of preparation before the event. Shadoe O’Dell, a first year Culinary student, said he had been working with his team for days in order to prepare for the competition. O’Dell was paired with Gusto Catering; the other participating restaurants included The Bauer Kitchen, The Berlin, Bingemans, Borealis, Charcoal Steakhouse, Lancaster Smokehouse and Solé and Blackshop. 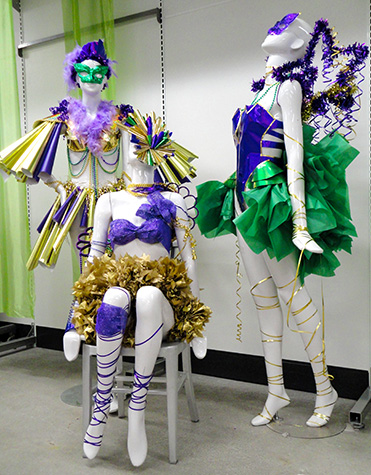 The Mardi Gras theme was brought to life thanks to the work of four Visual Merchandising Arts students who designed and created a display for the Iron Chef competition.

The eight teams were required to use a combination of ingredients for their signature dishes, which included ham, chorizo, mussels and salmon. The judges scored dishes on theme, flavour and presentation and guests were also invited to submit votes to determine the winner of the People’s Choice awards. Judges included renowned chef Robert Rainford of Food Network Canada’s Licence to Grill, Ron Caudle of Caudle’s Catch Seafood, Junior Culinary Team Canada member and Conestoga graduate Benjamin Lillico and Saraiva.

The 2016 Iron Chef competition raised $15,000 and proceeds will be directed to scholarships to support the college’s Culinary students. It was also announced that a new scholarship, named after VIP judge Robert Rainford, will be established.

Conestoga’s School of Business and Hospitality provides a broad range of culinary and hospitality programs to prepare students for successful careers in the growing hospitality industry. As part of their learning experience, students operate Bloom, a full-service, licensed dining room at the Waterloo campus that is open to the public. For more information, visit bloomatconestoga.ca