Putting their skills to the test

Students in Conestoga’s Robotics and Automation program put their design, problem-solving and teamwork skills to the test last week as they competed to see who could create the best device for accurately launching potatoes into the field behind the college’s Cambridge (Fountain Street) campus.

The annual Potato Launch, held this year on October 9, is part of the program’s Problem Solving and Design course, and is aimed at developing students’ abilities to solve engineering problems.

Student teams have two weeks to design, develop and test devices that can safely launch 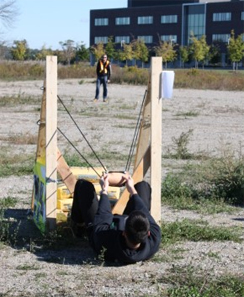 potatoes at a 2-ft square target located 75 feet away. During the actual competition, the winning team is determined by both the accuracy of the launch and the distance that the largest piece of potato travels.

The Potato Launch builds on the Egg Drop competition held earlier in the term, where students create devices to transport fresh eggs through a twenty-foot drop to land intact on a target below.

According to Professor Henry Kastner, this competition requires much more of the students in terms of the design process and in the consideration of safety. “Students have to do a lot more problem-solving and documentation of went well and why,” Kastner said.

Student Mohammad Qasem agreed, saying “This is a more complex design that required us to use a greater application of our skills to be successful.”

This year’s winning team for the field competition - Marko Divjak, Georgel Dumitrel, Nikola Rajic and Petar Stojanovic - used what they described as an “effective and efficient design” for their device they named the Delta Launcher. Based on a slingshot, it was constructed from a kneepad, bungee cords, wood and screws. The team used cement bags to weigh down the device as the shooter leveraged his body weight against the structure to launch potatoes.