Do you ever wonder what happens to old furniture that’s been left on the curb and picked up overnight? Teams of students in Conestoga’s Interior Decorating program have spent months giving some of these unwanted treasures new life by adding colours, patterns, fabrics, paint, jewels and - in some cases - clothing.
The results of their efforts were put on display and auctioned off in Conestoga’s third annual Chairity Gala, held at the Waterloo Region Museum on March 18. 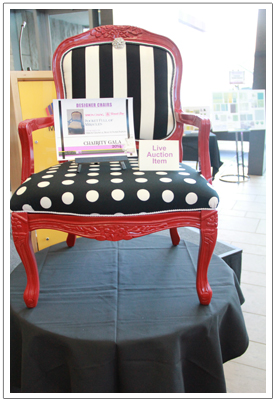 With a row of uniquely recrafted chairs lining the wall of the museum, Interior Decorating students could rest easy and celebrate their successes over cocktails, appetizers, raffles, silent and live auctions. 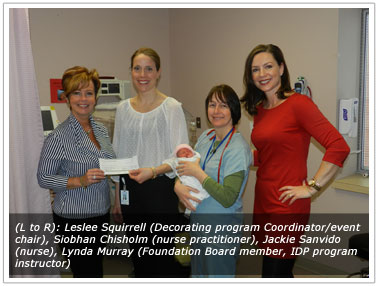 Proceeds from the annual event are donated to a charity chosen by the students: this year’s recipient is the Special Care Nursery at the Guelph General Hospital. According to Professor Linda Murray, the choice was an easy one. “In addition to the chair project, students also worked on a design competition … and a portion of the proceeds will also help go to redecorate that special care nursery at Guelph General Hospital. We’re really leaving our mark on the community,” Murray said.

Program co-ordinator Leslee Squirrell explained that finding the right chair was the first part of the challenge in reinventing the piece of furniture. “It had to be an old, unused chair that is destined for the landfill. Students are assigned an element of design - things like colour, line, texture, pattern, shape, light - and they have to use materials of their choice to represent that element of design on their chair.”

And with chairs decorated with everything from peacocks, blueberry pie and the Wizard of Oz, to a dress and tuxedo pair, attendees had several options for taking home a unique piece.

But the challenge of bringing new life to an old chair wasn’t given only to the students. “We have faculty members as well, who have done it,” Murray said. “We also have local designers and decorators who have donated chairs as well - including the spectacular chair from Simon Chang.” Last year’s donation from Simon Chang raised $850.

As part of the project process, students set up their chairs in the Atrium at Conestoga’s Doon campus and created videos or photographs of their production experiences.

Six designer chairs as well as the student and faculty designed-chairs were auctioned off through the course of the evening. 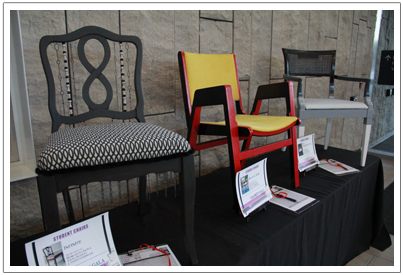 This sold-out event attracted notable guests from across the community, including Kitchener Mayor Carl Zehr and Waterloo Mayor Brenda Halloran and raised $7500 for the Special Care Nursey at Guelph General Hospital.

Conestoga’s Interior Decorating program is a two-year diploma program that provides students with the opportunity to develop interior decorating skills and knowledge for residential, retail and commercial environments. For more information, visit the program website