Danny Ingrouville, 54, clasps the grips on the elliptical machine and slips in his earbuds.
Massive Attack is what he needs to empty the display spaces and unplug the product spotlights in his mind.

He closes his eyes. All the brilliant colours slowly filter out of his grey matter.

The principles of placement disappear into the background at the Cambridge YMCA. The sexless mannequins and engineless props he employees — like an Amelia Earhart-style airplane — vanish from his soul’s storefront windows.

Ingrouville, a visual merchandizing and display expert, is at peace.

For an instant, he is serene, like when he danced as a boy, a ballet-twirling Billy Elliot from the back streets of Toronto. But only for an instant.

The ideas cascade back into the void.

Waves of new ideas for new displays. Fresh concepts to create a spectrum of fresh feelings. Comforting scenes to soothe your psyche and open your wallet. Tacky ideas to tease your sense of the silly and sublime. Excessively tacky ideas to disorient and disturb.

Conflicting images that jam your thought frequencies and jar the cents from your senses.

A suspended wrecking ball poised to swing down and smash fine China.

The ideas all crash into Ingrouville’s emptied cranium like frenzied Black Friday shoppers as the shop doors open. They claw for space. They wrestle for prominence. They fight for his attention. His intuition and feelings guide him. 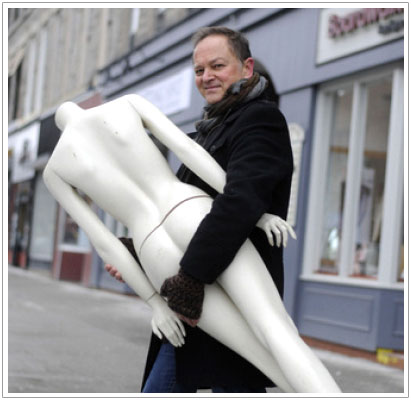 This is where consumerism meets concept art.

This is the mind of Ingrouville, where the art of sales dresses in style.

“I’m here to convince you to buy that little black dress,” he said.

This is what Prof. Ingrouville, the City of Cambridge’s artist-in-residence for 2013, teaches his visual merchandizing students at Conestoga College. The art of convincing by telling a story arranged with real, human hands.

It’s not just the dress that’s being sold. It’s every other idea — every attitude, every lifestyle, every subliminal message — presented in that window beside the fancy frock. His education? Of the highest order in the world of visual merchandizing.

Ingrouville apprenticed with Club Med in Switzerland. He interned with the world-famous Harrods department store in London, England. He has produced $300,000 spectacles, like a Niagara Falls casino extravaganza that featured giraffes and assorted circus giants strolling among the crowd.

Now, the little names in Cambridge storefronts can come to him, too. The shops of Galt, Preston and Hespeler are encouraged to work with him during his city residency. From the Main Street bridge, in the city he’s lived in for 25 years, he sees row of storefront windows to conquer. The current age of fiscal and visual austerity will end soon, he is certain. It always seems to after wartime passes. Another wondrous era of visual promiscuity looms in merchandizing, he believes. The ’50s. The ’80s. The mid-10s?

There are so many exciting happenings in Cambridge — a new theatre, core areas striving for renaissance, a school of art, expanding neighbourhoods — he wants business to reflect that energy to every gobsmacked passerby.

“I want to get the insides up to the calibre of what’s happening all around,” he said.

To get the stir outside to match the stir inside.

Like the time he gussied up The Bay store window in downtown Toronto with huge pink elephant legs about to stomp on androgynous “schleppy” mannequins in Esprit clothing. Peanuts spilled out of the schleppies’ purses.

It was too much for one Toronto newspaper, which published a front-page story suggesting the store was “stomping” on women.

The peanuts brought mice, said to strike fear in elephants, to the store window. The publicity brought people to the store. The store managers, claiming their intention was to give their furry little friends a snack, brought a cute slogan to the gawkers.

It all came together in the mid-1980s in the store where Ingrouville, while ineptly dressing a naked schleppy, met his wife Jane. How awkward. But awkward can work in life and in visual merchandizing. You have to mix it up, keep people interested.

“Keep changing,” said Ingrouville, the father of two grown girls. “You have to keep reinventing the wheel.”

And you have to empty the mind to let new ideas in.

So there is the Unfinished Sympathy playing in Ingrouville’s ears as he strides at the Y.

For a moment, there is quiet. The moment never lasts.

This story was originally published on therecord.com - Sunday, February 24, 2013. Written by: Jeff Hicks