Three Conestoga students who won a robotics race car competition have donated their $1,000 prize to the SickKids Foundation. 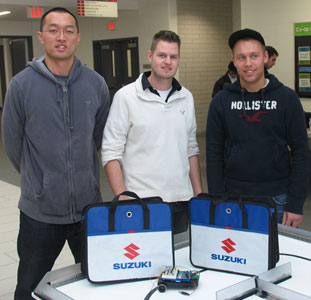 Scott Twynstra, Aaron Gee and Zeyang Zhang, all second-year students in the college's Robotics and Automation  program, beat out 14 other teams to take first place in the fourth annual Line Follower Project on December 9.

Held at Conestoga’s new South Campus, the event was open to the public for the first time, and drew a sizeable crowd to cheer on the mini racers.

Conestoga Students Inc., which provided the prize money, allowed the students to donate the $1,000 winnings to any charity of their choice.

John Tielemans, coordinator of the Robotics and Automation department, said it was the first time that CSI had been involved in the competition and that the donation added extra incentive for the students.

"It was a great thrill to see the students give careful thought about the charity they chose," he said. "I feel it is a great way for the college to show our commitment to improve life for more than our students, staff and faculty.”

Nancy Brooks, associate director of events at SickKids, said the donation will go a long way in helping their cause.

“Community support like this makes a big difference to the families at SickKids, and helps the hospital continue to be a leader in pediatric research, learning and care," she said. “We are grateful for the support of the students at Conestoga College."

The competition, which served as the final assignment in Introduction to Robotics, required students to design and build self-propelled robotic cars to follow an oval track as quickly and accurately as possible.

Tielemans said the students had to use skills they'd learned throughout the course of the program, including problem solving, troubleshooting, optoelectronics, electrical designing and building, and in some cases microcontroller programming.

“The students must decide on using standard electronics or miniature computers to see and follow the line. They strive for a balance of speed and control since it's easy to make a car move quickly, but at higher speeds it is more difficult to follow the line.”

The Robotics and Automation program is a diploma co-op program consisting of six terms at the college and three working at industry-related jobs. Students in the program gain knowledge and skills in programmable automation controllers, hydraulics, pneumatics, mechanical technology and servomechanisms, among other areas.
“The Robotics and Automation program is as close as you can get to 'real world,' so the students are ready to hit the road running upon graduation," Tielemans said. "One of our strengths is that our labs incorporate equipment which is actually used in industry.”

The next big event for the program will be the annual Sumer Technology Showcase in August, which is traditionally well-attended by local industry representatives actively recruiting students from the college.