Fighting for identity in mainstream Canada is an ongoing battle for aboriginals.

“Our youth are committing suicide, they’ve lost their connection with the culture, they’ve nothing to hold on to.” 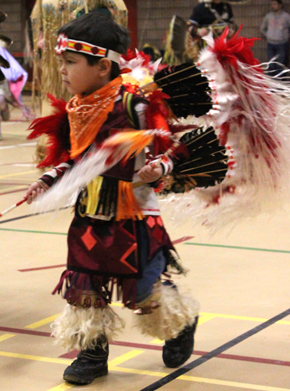 But at the first ever traditional aboriginal powwow held at Conestoga College on Saturday, Longboat saw young people youth connecting with their traditions.

Dozens of aboriginal youth — some as young as three-years-old — danced in a regalia of feathers and bells along with the adults.

Longboat said the powwow is “a celebration of life, because when you dance andyour feet are touching the earth … when we’re actually connecting to the earth, and singing with the sound and vibration that connects to the whole universe, it’s a connection to the creation.”

There were hundreds of aboriginals and non-aboriginals alike watching the traditional dances, singing and drumming, and perusing the medicine wheels and dream catchers at the vendor stands.

There are about 12,000 people of aboriginal descent living in the region, said the college’s aboriginal services manager, Myeengun Henry.

Most belong to the Six Nations, but Henry says Inuit migrating from the north are also settling in the area.

The inaugural college powwow was a success, partly because it was held in the winter when the circuit of weekly powwows across southern Ontario slows down, but also because there is no real meeting place for the region’s aboriginal community. 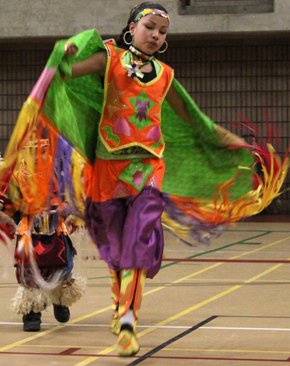 Conestoga’s aboriginal services organization is less than a year old and partners with the college administration to ensure student success, build community outreach and educate the college community about aboriginal people.

Henry said to combat dropout rates among aboriginal youth, he has visited high schools in the area, and wants to follow young aboriginals from primary school onward, to guide them toward post-secondary school, instead of “bombarding them” at graduation.

The new Aboriginal Students Association at the college represents 140 identified aboriginal students, but Henry believes there are actually more than 200 students of aboriginal descent.

“Identity is the only thing that’s going to make us successful,” Henry said.

“We have a bad history if you look at the residential schools — that tookaway our identity and culture — and (at the powwow) is where they’re getting it back,” he added.

“We’re starting to identify now with the mainstream, so we’re hoping to have a better relationship with mainstream society than we ever had in the past by establishing ourselves.

“We hope that’s what the powwow is doing.”

Story by Melissa Tait, Record Staff. Originally posted in the Record on Feb. 27, 2011