A car horn blares and instantaneously 28 auto technicians hunch over their workstations. They’re on the clock. 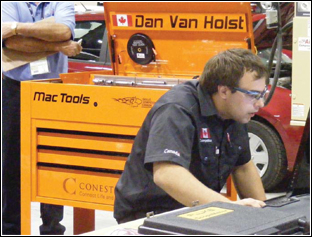 Key information for the task head is attached to a clipboard. The mechanics skim through the pages and prepare to diagnose the mechanical issue.

The technicians have three hours to beat the clock – and each other.

After a few minutes, many of them turn and hold up their work sheets to a supervisor to ask a question. There’s a lot of pointing and hand gesturing, and an obvious language barrier. It’s just one of the obstacles competitors face during an international competition.

This isn’t the Olympics though – it’s WorldSkills 2009.

WorldSkills is held every two years andfeatures competitors aged 17 to 22 from all over the world competing in 45 different skilled trade and technology categories such as carpentry, IT network support, mobile robotics, bricklaying, and cooking.

The 40th edition of WorldSkills was recently hosted in Calgary. It’s only the second time in the history of the competition that Canada has hosted the international event.

In total, more than 900 youths competed in WorldSkills 2009, as about 150,000 people passed through the grounds to watch the competitors in action.

One of the skill categories is Automotive Technology, which featured 28 auto technicians from 28 different countries.

For the auto competition, the technicians work their way through seven different stages during four days of competition.

Each stage starts with a safety orientation of the workspace and then the competitors get 15 minutes to become familiarized with the work area. Then they have to diagnose the problem and fix it. Each competitor supplied his own tools.

You might think that there would be some home field advantage for the technicians from Canada and the U.S. working on North American cars, but that wasn’t necessarily the case in Calgary.

“The Ford Focus is essentially a German car, so the system is in Europe,” notes Renaud. “And then there’s the diesel system stage, which isn’t widely used in cars over here.”

Chad McConnell knows exactly what the competitors are going through. He’s currently working as a heavy-duty technician for Finning CAT in Edmonton. But he was the Canada Skills national champion in 1999, and went on to compete in WorldSkills 2001 in Seoul, South Korea.

“It was awesome and overwhelming. It was an incredible experience,” says McConnell. “A guy my size will never win the 100-metre dash, so this is the closest to the Olympics I’ll ever be in. It’s something you do for a living and you get to show off and brag a bit."

For the actual competition, McConnell finished 14th out of 26 competitors, but it was a close race as only 25 points separated 9th and 16th place. Still, there’s more to WorldSkills than the competition.

“It was a big cultural experience,” adds McConnell. “We did quite a few team meetings in Montreal before going over to South Korea, and I also went to South Korea in 2000 as part of a Pacific Rim Youth Conference to get prepared for the food and culture.”

The chance to meet and talk shop with other young mechanics from around the world is also a tremendous experience, says McConnell.

The Alberta government is likely hoping the experience of the WorldSkills rubs off on some of the 150,000 attendees who took in the event.

To help host the event, the province invested $24 million, which was nearly half of the operating budget. High school children from all over the province started classes a week early just so they could be organized to attend WorldSkills.

Part of the money provided by the province was used to purchase equipment needed by the competitors to perform during the competition. Following the event, the equipment and tools were donated to publicly funded high schools that offer career and technology studies.

McConnell knows firsthand a career in trades provides good life experience. He has five tickets under his belt and all have served him well.

“It’s good to see young students in trades. I made a good living and will for a while,” says McConnell. “Even if you get into a trade and don’t stick with it, it’s good experience. I’ll never forget how to change a tire, or do an oil change. It’s good life experience and beneficial for everybody.”

As far as life experience goes, it doesn’t get much better than Ireland’s Colm Corcoran’s time at WorldSkills 2009. Corcoran won the gold medal in Automobile Technology, barely holding off Jack Frederick of the U.S. who finished 14 points off the lead.

The top score any competitor in the WorldSkills competition can achieve is 1,000 points. In the Automobile Technology competition less than 100 points separated the gold medal winner from the 25th place finisher.

As Renaud sums it up: “Like the Olympics, win or lose, they’re all winners. These guys are all champions.”