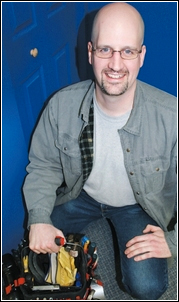 Local contractor gets the job done, from leaky faucets to home renovations. He's done everything from deliver pizza to drive a tow truck. But at the end of the day, Kent McNaughton decided to return to his passion — home renovations.

"I always wanted to do it, but I wasn't always sure it would pay the bills," said the Waterloo resident.

Now the owner of Seven Sisters Renovations, McNaughton is finding there’s room in the local market for his services.

But it took him a while to get to this point.

McNaughton was originally from the area, but left to work as a ski guide in Colorado after he finished high school. His family stayed in the area though, and he moved back to Waterloo in 2002 to be with them.

He stumbled into the home-renovation business a couple of years later by chance. "When I first got here I knew I couldn’t ski anymore, so I was actually delivering pizzas. My landlord needed help with some things around the house, and I proved myself capable of doing all this work," McNaughton said.

He started out fixing leaky faucets, changing doorknobs and installing ceiling fans, drawing upon the skills he had learned during six years of woodshop classes when he was younger.

"I took it every year and I really enjoyed working with wood," he said.

He also enrolled in Conestoga College's renovation technician program — a two-year full-time course — in which he learned a lot of skills. Plus, he had the opportunity to meet contractor Mike Holmes, star of the popular HGTV program Holmes on Homes.

To get his business up and running officially, McNaughton turned to the Waterloo Region Small Business Centre for assistance.

"I really didn’t know where to start — I knew how to fix the leaky faucets, but I didn’t know how to do anything about the business," he said. "So I came in here and it’s been a great resource centre."

Roy Weber, the centre's advisor, helped McNaughton register his business and get a GST number. And he said he was impressed with the entrepreneur’s plan.

I thought it was great because the demand was certainly there. Instead of moving, a lot of people are staying put and either building on or renovating their homes, so there’s a whole potential there and there’s always room for one more good contractor."

McNaughton's been running his business full time for a year, leaving his part-time delivery jobs behind him.

He credits word-of-mouth advertising for his busy schedule, building decks, sheds and fences, and renovating bathrooms, kitchen and basements. About half his time is spent on handyman jobs — he will work by the hour doing things like painting or recaulking bathtubs — and the other half is devoted to big renovations.

"(I do) almost everything that a homeowner would need for maintenance and repair on their home," McNaughton said.

He admits, however, that deck building is his favourite job. Luckily, that service seems to be in demand.

"We had six decks last summer and I plan on doing 12 this summer," McNaughton said. "It's right back to my woodworking skills — and you’re out in the sunshine all day. It’s good, honest hard work."

Originally posted in the Waterloo Chronicle Feb. 11, 2009
Story and photo by Jennifer Ormston