Third-year Conestoga Integrated Advanced Manufacturing Technology students (IAMT) were featured in the Record for their work designing and producing an advanced testing cell for Research in Motion (RIM). The system tests keys on their world-famous BlackBerry. 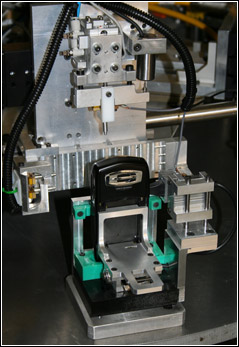 As printed in the KW-Record, August 15, 2007
BARBARA AGGERHOLM
RECORD STAFF

It's not everyday that a student gets the chance to improve production of the wildly successful BlackBerry.

So when Conestoga College's students were approached by BlackBerry-maker Research In Motion, they dived right in.

Yesterday, third-year students in the Integrated Advanced Manufacturing Technologies program showed off a complex manufacturing system they designed and produced.

It was one of many projects unveiled by technology students.

"We challenged the Conestoga College students with developing an automation solution, and we were very impressed by their innovative and well-thought-out project," said Mike Greening, director of manufacturing process development at RIM.

"We're now examining how those ideas could be implemented to enhance our existing processes."

The students' system actually replaces work now done by hand -- or rather, by thumb -- at Research In Motion.

The BlackBerry Flexible Manufacturing Cell is a group of automated processes.

It tests all keys on the wireless e-mail device, downloads software and applies labels.

The automated process picks up any BlackBerry that doesn't pass the test and places it in a bin.

"What was exceptional is that at RIM, prior to the design of this project, the keys were tested manually with a guy's thumb," said Henry Reiser, chair of Conestoga College's engineering and information technology program.

"What we were able to do was actually measure what is a good force for the key release. . . . Therefore we could say either it was too soft or it's too hard and then we could recheck the key."

It's the first time the BlackBerry-maker has worked on a project with Conestoga College students.

Students Jessica Bailey, Brandon Dulle and a team of 22 classmates in the applied degree program started working on the project about eight months ago.

"For RIM to come to us and tell us what they wanted out of us, and for us to go ahead and design it, get the approval and actually manufacture it and see it work now, is quite amazing," said Dulle, 21.

Bailey, 22, knows all about challenges.

When she was seven, she became very ill with repeated ear and nose infections, which eventually "killed my kidneys."

She had a kidney transplant when she was eight.

Since then, Bailey has been taking anti-rejection drugs. She drinks four litres a day.

It has made the creative young woman even more appreciative of opportunities like the one posed by RIM.

"I just look at it as a second chance to do everything I can do in this life," she said.

Both her father and grandfather are engineers. She's the only woman in the class.

In high school, "I loved to make stuff," she said.

"I lived in auto class."

She excels at using mechanical parts to create objects such as a rocking horse or a toy train.

"This past year, I made a frog out of floppy discs," she said, laughing. "I have a large imagination."

Soon, Bailey will leave to volunteer at a CNIB camp. In September, she'll begin a co-op work term at Research In Motion.