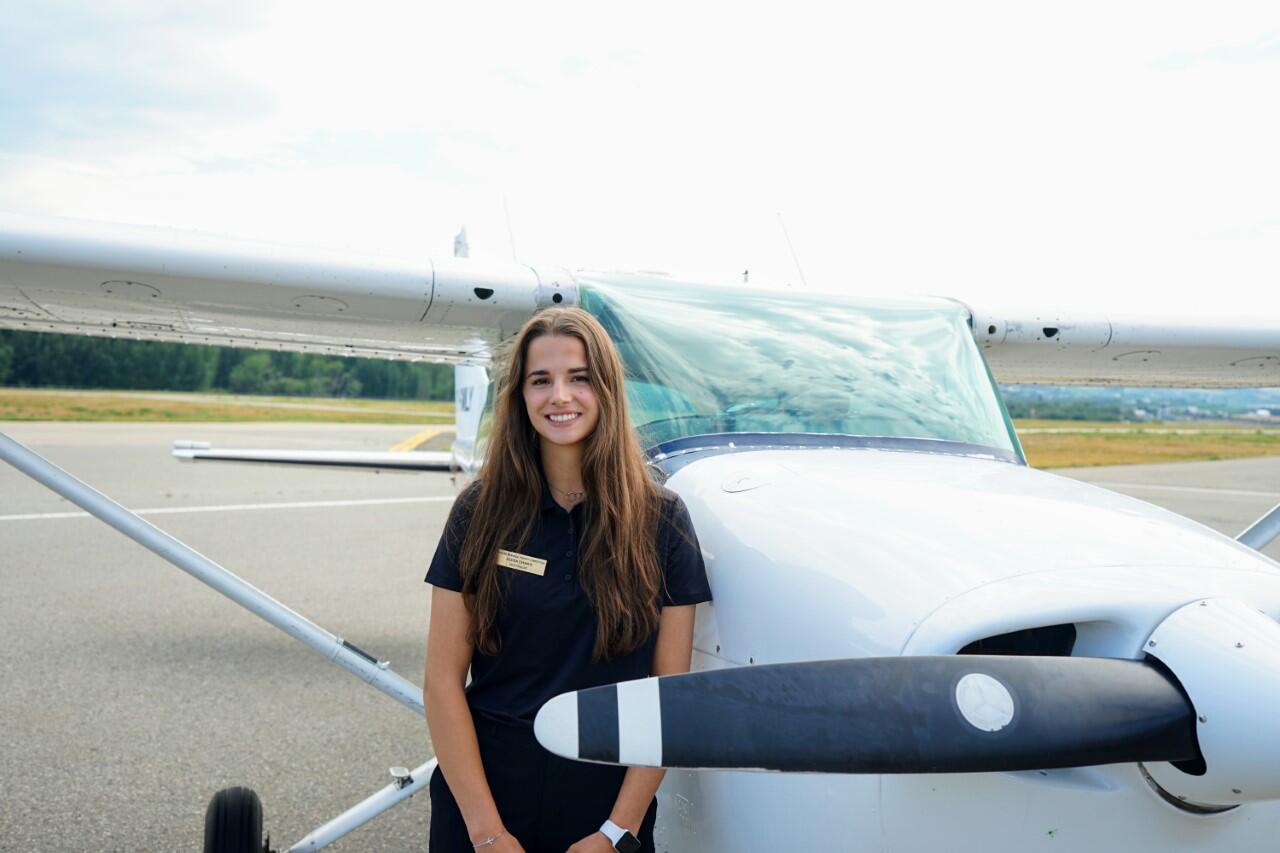 Conestoga Aviation student Alivia Chanyi was one of six finalists selected across Canada to participate in the 2022 Webster Memorial Trophy Competition.

The prestigious competition dates back to 1932 and is named in memory John Webster Jr., a civilian pilot who represented Canada in the King’s Cup Air Race in England in 1931. Open to those holding a valid Canadian Pilot Permit Recreational or a Private or Commercial Pilot licence in the aeroplane category, finalists complete a written exam, flight test, simulator evaluation and interview.

“I was so excited,” said Chanyi on learning she would represent central Canada. “It’s rewarding to be acknowledged in that way -- it makes you feel like you’re doing the right thing. I felt like it validated everything I’ve put into aviation and showed me that this is what I’m good at and this is what I should be doing.”

Chanyi, a first-generation pilot, became interested in aviation during a sightseeing flight when she was a teenager.

“I got to sit upfront by the controls and I was firing off questions to the pilot; I was just so intrigued,” said Chanyi. “It was an incredible experience; on the way back, the pilot asked if I wanted to land the plane. He had me hold the controls and as soon the wheels touched the runway I knew I wanted to do it again. It was something that was really eye-opening for me - as a female it’s just not something you see a lot of other women doing so it wasn’t something I had seen as a pathway before.”

The flight piqued her interest in the industry, and thanks to a pilot who attended one of her Grade 10 careers classes, as well as a research project on what a career in aviation would look like, she had the information she needed to get her career in motion. She started her private licence training at the Tillsonburg airport and then looked to Conestoga to complete her post-secondary education. She was happy to be one of seven women in the Aviation program, which she started in September 2020.

“When you’re doing something that you know you’re meant to be doing and doing something that you love there’s no obstacle that’s too big," said Chanyi. "If I was giving advice to someone pursuing an interest in aviation, I’d say there’s no better time to be a pilot. We’ve never seen the industry have so many opportunities for young pilots and pilots coming out of their flight training.”

“There’s always a place for a woman in aviation. Don’t ever let the bias or the stereotypes move you away from pursuing that passion,” added Chanyi. “If you’re interested in it, then there are so many incredible women willing to assist you and so many organizations that are there to promote women in aviation and support you in your journey so you’ll never be alone. If that’s something you’re truly interested in, don’t let anything stop you.”

Conestoga’s Aviation - General Arts and Science pilot training program is the only collaborative diploma program that offers a choice between flying airplanes at Waterloo Wellington Flight Centre or flying helicopters at Great Lakes Helicopter. Through pilot training at one of the flight centres, and classes at Conestoga, students can complete a diploma in two years as well as the pilot training to allow them to undertake the Transport Canada Commercial Pilot Licence testing.