Sculptures by Conestoga culinary professor and award-winning ice carver Philippe Saraiva are featured in an installation at Waterloo Public Square as part of the city’s annual Winterloo festival. 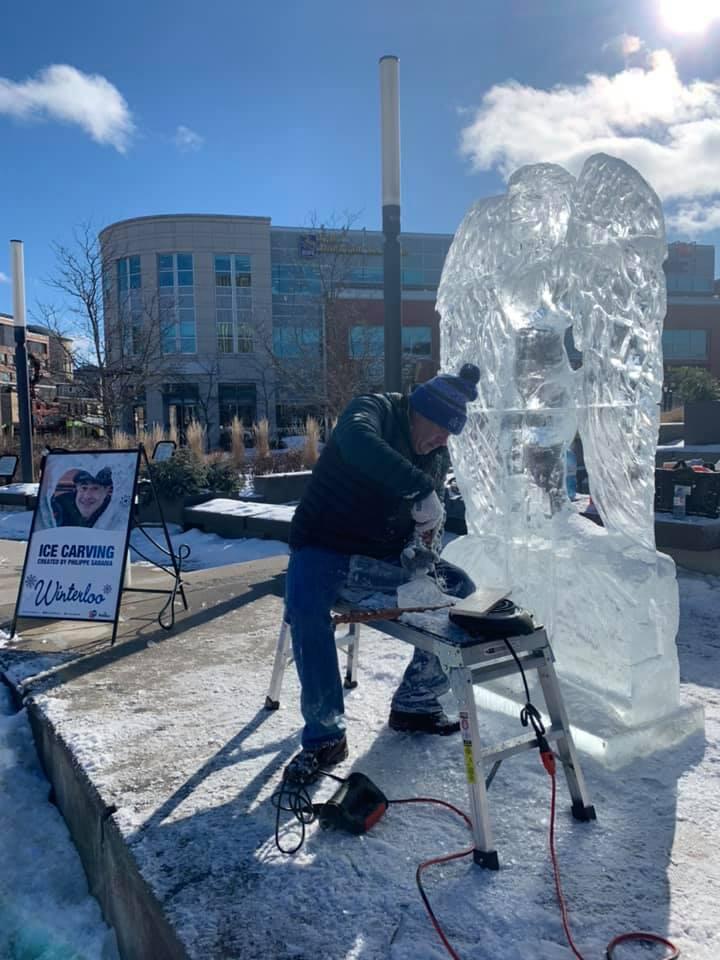 Sculptures by Conestoga culinary professor and award-winning ice carver Philippe Saraiva are featured at Winterloo, including the piece Hope for 2021.

Hosted by Create Waterloo, Winterloo encourages the community to celebrate the season with winter-themed indoor and outdoor activities. Traditionally held over three days in uptown Waterloo, the festival adapted this year to accommodate Public Health guidelines in light of the ongoing COVID-19 pandemic. Activities that allow participants to enjoy the festival at home, online and safely around the community will be held throughout the winter. Saraiva’s ice sculpture installation began January 23 with an additional carving on January 30. The installation will be on display as long as weather permits.

Using a variety of hand and power tools on-site, Saraiva transformed four 300-pound blocks of ice into two feature carvings. The first -- an angel Saraiva named Hope for 2021 -- is in honour of front-line workers.

“I was talking with my daughter about what I could carve within the timeframe and thinking about front-line workers and what would provide hope as we continue to face COVID, and came up with the idea of the angel,” said Saraiva. “Usually, a carving is meant to last a day or the duration of the event. Because this one is meant to last longer, the design included more contact points with fewer empty spaces and it’s a little more structurally sound.”

When preparing to carve, Saraiva said a number of factors need to be taken into consideration, including the weather.

“Will it be raining? How cold is it? Is the sun going to shine on the piece? You have to be prepared for all of it,” said Saraiva. “Even if it’s cold, ultraviolet from the sun could shatter the ice while you’re carving, and if it’s too warm, the ice could fuse together. The block of ice is all you have to work with.”

Saraiva’s second carving for the installation on January 30 features a bull in celebration of the upcoming Chinese New Year and the year of the Ox.

Saraiva has been ice carving for almost 20 years, participating in festivals and competitions across the province as well as internationally. In addition to having his work featured at functions around the region, Saraiva also often creates ice sculptures for Conestoga events and ceremonies. This year marks the eighth time Saraiva has participated as an ice carver in Winterloo activities.