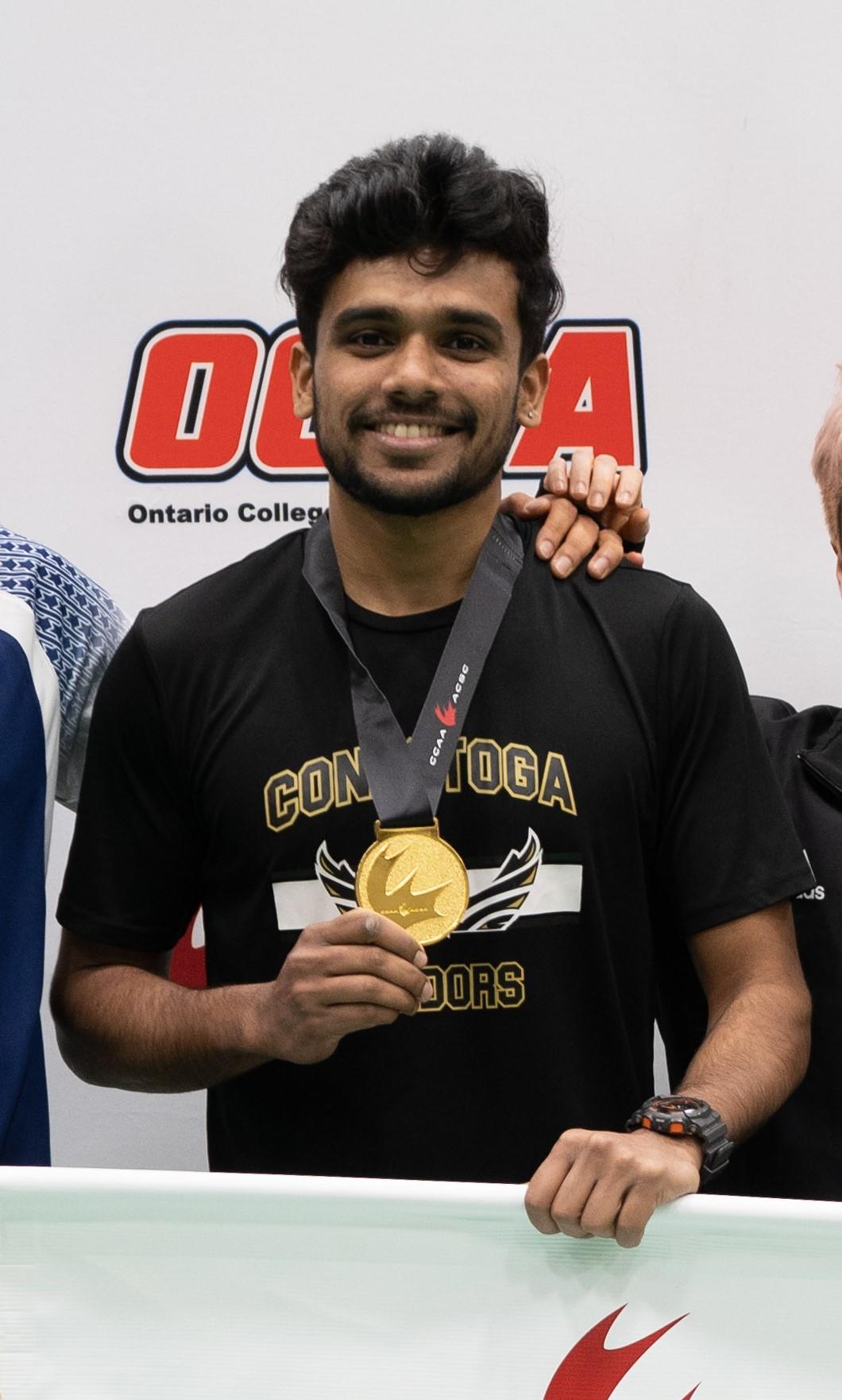 Hosted at the University of Toronto Mississauga from March 5-7, the 2020 CCAA Badminton National Championships welcomed the top student-athletes from five regional conferences across the country. Satheesh -- an international student in the Process Quality Engineering program -- earned his spot by placing second in the Ontario Colleges Athletics Association (OCAA) championships in February.

“Winning gold for Conestoga was special for me,” said Satheesh. “It was great to represent a college that has provided me with so much.”

In his first season with the Conestoga Condors, Satheesh sealed his gold medal with a 22-20 final set win against Humber’s Ramnish Kumar.

Satheesh, who is from Cochin in India, has been playing badminton since the age of six. Competing in both singles and doubles, he has participated in tournaments at state, national and international levels, winning titles in both categories and ranking second in India in doubles. His passion for badminton has also led him to work as a senior coach for high-performance athletes in India, Qatar and now in Canada at the KC Badminton Academy in Kitchener.

Satheesh said he was interested in trying out for the college’s badminton team after researching Conestoga’s varsity program online prior to his arrival in Canada.

“Varsity is a key part of the student experience,” said Todd Erskine, assistant manager of Athletics and Recreation. “It has the power to create community and identity, and not just for student-athletes.”

Erskine said Satheesh created quite a buzz early on, drawing the college community to the stands each match to show support.

“Pranav had an incredible season, demonstrating an elite level of performance time and time again,” Erskine continued. “His talent and success were celebrated by the community and helped further instill a sense of pride for our varsity program.”

According to Satheesh, much of his success this season can be attributed to the support he received from key members of the college’s Athletics and Recreation team: Erskine, head coach Roselyn Bevis, assistant coach Derek Lenos and assistant athletic therapist Stacey Harper.

Bevis, in her second year as head coach, has been instrumental in the badminton program’s turnaround and success. Her dedication and commitment saw her named the 2020 OCAA Coach of the Year. The foundation Bevis has created for the program has allowed all players, including Satheesh, to strive for excellence in the classroom and on the court.

Conestoga's Athletics and Recreation department offers programming and facilities designed to engage students and enhance their health and wellness through varsity and extramural athletics, intramural sports and fitness classes. The Recreation Centre at the Doon campus provides a full range of recreation and athletic services and houses a 35,000 square-foot fitness centre outfitted with state-of-the-art equipment. In 2017, the centre received a Design Excellence Award from the Ontario Association of Architects.