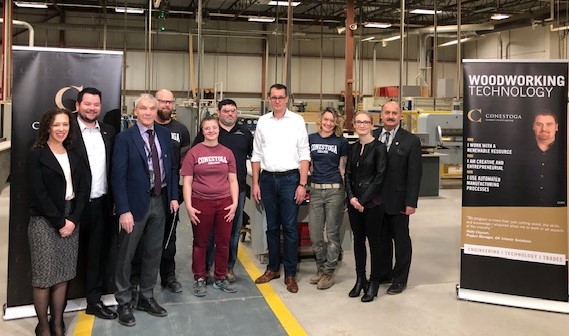 The Ontario government will invest $9.2 million for Conestoga to address the need for skilled trades workers in the community.

"On any given day, there are more than 18,000 vacant jobs in the Kitchener-Waterloo-Barrie region," McNaughton said. "Those are paycheques waiting to be collected. But the workers aren't there. My mission is to bridge that skills gap in Kitchener-Waterloo and throughout the province.”

The Ontario government will invest $9.2 million for Conestoga to provide in-class training to apprentices in 21 trades in 2020-21. Training will occur at campuses in Kitchener, Waterloo Guelph, and Cambridge.

In addition, the province will provide close to $750,000 to fund three pre-apprenticeship training projects at Conestoga College that will allow 60 students to get started in trades such as Industrial Mechanic Millwright, Truck & Coach Technician and Cabinetmaker.

"About one in five new jobs in Ontario over the next five years is expected to be in trades-related occupations," McNaughton explained. "Exposing people to careers in the skilled trades and getting them the in-class training they need makes good sense: It helps businesses find talent and opens the doors for people who want to work."

In conjunction with the announcement, Minister McNaughton unveiled the province’s new marketing campaign designed to highlight the potential of skilled trades careers.

For more than ten years, skilled trades positions have consistently ranked as the most difficult roles to fill, both locally and across the country. In 2017, the Ontario Skilled Trades Alliance reported that up to 41 per cent of its members would hire more employees if they could find people with the right skills.

According to BuildForce Canada, the construction sector in Ontario alone will require 104,000 new construction and maintenance workers by 2028.

“Building the skilled trades workforce is essential to Ontario's prosperity and well-being,” said Conestoga President John Tibbits.  “The government’s continued investment in pre-apprenticeship and in-class training is an important step towards addressing workforce needs while providing opportunities for individuals to access education that leads to successful careers.”

Conestoga is a provincial leader in trades and apprenticeship training, delivering 21 apprenticeship programs, 16 certificate programs and 12 diploma programs in skilled trades-related fields. More than 3,000 apprentices train at Conestoga each year.

In addition, Conestoga delivers a number of special programs and initiatives for area youth, particularly young women, to help them discover the potential of skilled trades careers.