Building for the future in Brantford

In 2012, Conestoga began the delivery of programming in Brantford through a partnership with Wilfrid Laurier University, which had established a campus in the city in 1999. As the newest member of the city’s downtown academic district, Conestoga provided unique value for the community, delivering a slate of local, career-focused programs to serve workforce needs. After six years of steady progress and success, the college took a major leap forward in 2018, acquiring new facilities, enhancing program offerings, and increasing enrolment exponentially, from about 100 full-time students in 2017 to almost 500 in September 2018. 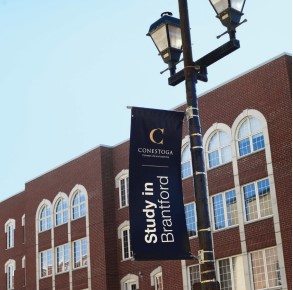 Conestoga looks to further expansion in Brantford, with additional program offerings that will support students from the local community and around the world to develop new career skills for successful futures.

“As the college looked to expand its footprint, it became clear that Brantford was a market that was underserved in terms of college-level education,” said Osborne.

With a large pool of qualified international applicants and limited space at other campuses, expansion in Brantford provided new opportunities to increase enrolment, augment existing programming and develop an enhanced service model in the city that would support both local and international students.

To facilitate growth, the college acquired a number of properties in the downtown area and leased land at the Brantford Municipal Airport to support the delivery of trades training.

But new students, especially those who come to Canada from afar, require more than classroom and lab space. To make the expansion successful, Conestoga needed to support incoming students with all of their needs, from finding homes and part-time jobs in the community, to obtaining academic counselling and support, to creating opportunities for social and cultural engagement.

“The college was committed to Brantford, and invested in additional employees who could focus their efforts on providing support to students here in the city. As a result, there’s a real community feel here, and the students are getting great service,” said Osborne.

The local community stepped up in terms of providing accommodation for new students. Both the City of Brantford and Laurier Brantford played key roles in the success of the expansion as well. According to Osborne, the support provided through strong partnerships eliminated many of the growing pains that might have been expected with rapid expansion.

“It was really a team effort,” he said. “We worked with Laurier on a number of student engagement initiatives that resulted in multiple opportunities for cross-cultural learning for international and domestic students alike. It’s great to see our students co-mingling and learning from each other.”

“Being in downtown Brantford has really helped too,” he continued. “The students have enjoyed exploring all the restaurants and amenities, and have been very active in seeking out opportunities to help out at community events as they jump in and enjoy the Canadian experience.”

And while it’s been good for the students, Conestoga’s Brantford expansion has benefitted the community as well. The Downtown Brantford Business Improvement Area named the college as its 2018 Champion of the Year for excellence both in community relations and in promoting downtown Brantford as a live, work, play and learning destination.

With the groundwork now in place, Conestoga looks forward to further expansion in Brantford for 2019-2020, with additional program offerings that will support students from the local community and around the world to develop new career skills for successful futures.

One key area of expansion in Brantford is trades education and training to help address the critical shortage of skilled trades workers in Ontario and across Canada.

It’s an important issue. For more than ten years, skilled trades positions have been consistently ranked as the most difficult roles for employers to fill, both locally and across the country. In 2017, the Ontario Skilled Trades Alliance reported that more than 40 per cent of its members would hire more employees if they could find people with the right skills.

According to BuildForce Canada, Ontario will need more than 100,000 new workers in the construction trades alone by 2028. Government of Ontario projections indicate that more than one in five of all new jobs in the province will be in trades-related occupations.

The challenge is particularly acute in fast-growing communities such as Brantford, designated as an Urban Growth Centre in Ontario’s Provincial Growth Plan.

Stephen Speers is chair of Workforce Development & Partnerships - Trades at Conestoga, and is well aware of local industry needs. A native and long-time resident of Brant County, he sits on the Workforce Planning Board of Grand Erie and co-chairs the local Skilled Trades Alliance, a community organization dedicated to building the skilled trades workforce for Brantford and Brant County.

In 2018, his role at Conestoga evolved, allowing him to focus his efforts on expanding trades training in Brantford. An initial offering of the Heavy Construction Equipment Operation (HCEO) program mounted to gauge local interest exceeded expectations, and the race was on to identify and equip local facilities in advance of the September start-up date.

As Speers points out, there are special challenges involved in delivering programs such as HCEO. “There are a lot of logistical requirements,” he explained. “Students in the program are actually operating bulldozers and excavators, so we need acreage as well as classrooms and high-bay shops for storing the equipment.”

Drawing on both his knowledge of the community and his extensive network of contacts, Speers soon identified the Brantford Municipal Airport as a potential site: it could provide the land required as well as commercial hangar and warehouse space that could be transformed into classrooms and shops to meet program needs.

With the support of both the County of Brant Council and the Brantford City Council, which hold responsibility for the land and the airport operations respectively, a lease agreement was successfully concluded and Conestoga’s new trades campus in Brantford was launched.

Speers couldn’t be happier. “This is a real win-win solution,” he said. “We’re bringing activity to this end of the city, literally at the spot where city and county meet. And the actual physical site is absolutely excellent for the delivery of the HCEO program, better than we could have hoped for.”

The one challenge with the site was the lack of public transit service, with the nearest bus stop a kilometre from the airport. To address that concern, particularly for the international students in the program who were less likely to have their own vehicles, Conestoga initially provided shuttle service from downtown, but soon found it wasn’t required.

“Students in the program came from all around Brantford, Brant County and beyond,” Speers said. “As the program got underway, the students worked together to set up some carpooling options that allowed everyone to get to class. It’s worked out really well and everyone’s happy.”

With the first year of operations at the Brantford Municipal Airport now complete, Speers is looking at further expansion for Fall 2019. More hangar space has been leased and renovations are underway to support the delivery of an Electrical Techniques program starting in September and an Automotive Repair program scheduled for January 2020. Future offerings under consideration include a Plumbing Techniques program and a pre-apprenticeship in Landscape Equipment Operations.

A new, eight-week Production Welder program to be delivered in collaboration with local industry partners will be introduced in Brantford this year as well.

In addition, Conestoga will continue to work with local school boards for the delivery of trades-related programming through their School College Work Initiative and Specialist High Skills Majors programs. These activities help introduce local students not only to Conestoga, but also to the potential of careers in the skilled trades.

For Speers, that’s an important message that young people in particular need to hear.

“The skilled trades shortage is real. And the gap continues to grow as retirements outpace the number of people entering the skilled trades. For the next few years, there’s going to be an acute shortage,” said Speers.

“Skilled trades training is an excellent choice for students looking for successful careers, especially right now,” he continued. “If you work hard and develop yourself as a journeyperson in your chosen field, you are going to be in demand for your entire working life. There are enormous opportunities ahead - you can work for someone else or you can have your own business.”

“For those who enjoy working with both their hands and their heads, it’s a super way to make a living, with small costs up front and an earnings stream that most people would be envious of.”

This article originally appeared in the fall 2019 edition of Conestoga’s Connections: Building Communities and Careers. The magazine includes profiles of new and expanded campus facilities and initiatives, while highlighting some of the outstanding students, employees and friends who contribute to the success of the college and the broader community.