During a home game against Humber College on January 18, the Conestoga Condors women’s basketball team experienced what head coach Dee Channer described as an “historic first.” The game began with a Smudging ceremony and the raising of an eagle feather marking the first time Indigenous spiritual practices had been included in the game. 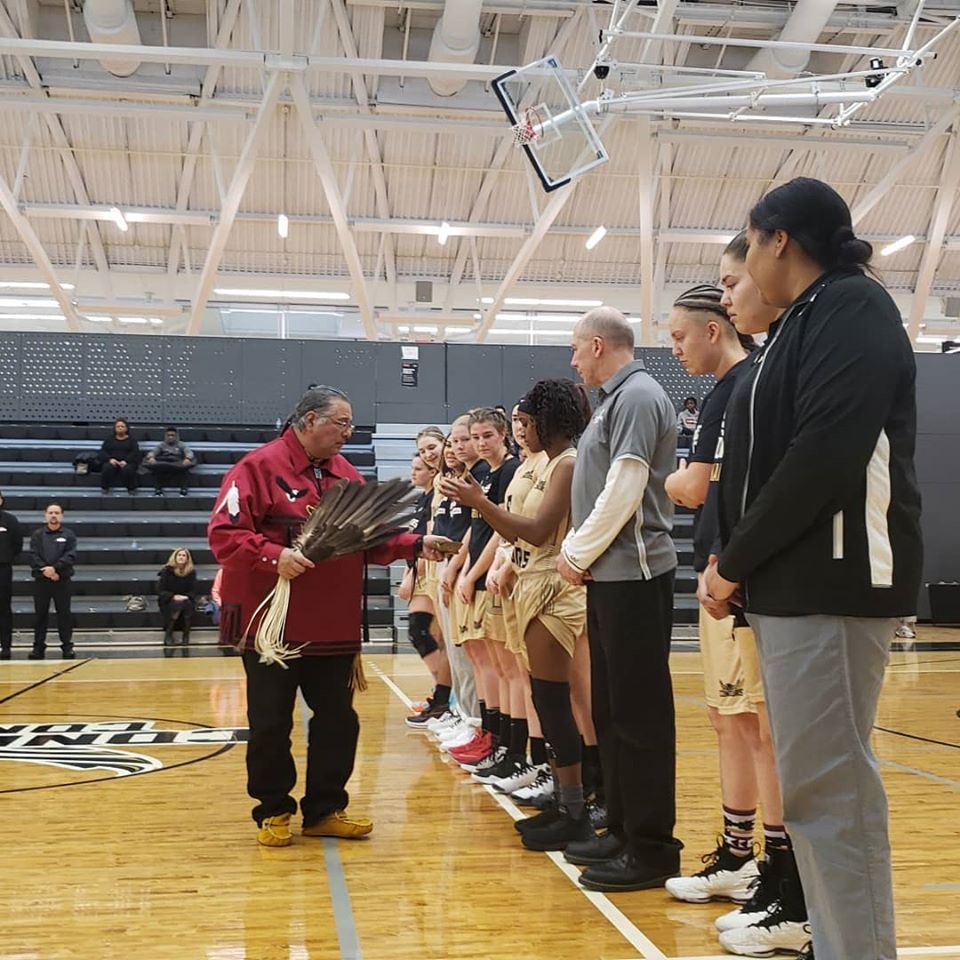 Aboriginal Services manager Myeengun Henry led a Smudging ceremony before the women's basketball game on January 18. It was the first time Indigenous practices had been included in the game.

“With the support of our athletic department, Aboriginal Services and the athletes, we brought truth and reconciliation to the sport of basketball … we will continue to do this for our home games and continue to bring a cross cultural connection of awareness,” said Channer.

Myeengun Henry, manager, Aboriginal Services, led the ceremony ahead of the game which took place in the Recreation Centre at the Doon campus. It was basketball player Skye Johns, a student in the Career Development Professional graduate certificate program, who inspired the activities.

Johns had been spotted sitting through the Canadian anthem during one of the men’s games. When coach Channer was approached about it she explained that Johns wanted to raise awareness of Canada’s history with its Indigenous Peoples. The Athletics & Recreation department stepped in to help identify ways to help.

Smudging is a ceremonial practice passed down through generations that involves the burning of sacred medicines like sweetgrass and sage. The plume of smoke it produces when burnt is used to purify the body and mind and cleanse away negative energy and emotions.

“I love having a strong Indigenous woman, educator and leader as a head coach,” said Johns. “I love being part of a team and an athletic department that are so willing to help us raise awareness. And I loved walking on to the court to the smell of sage. What a surreal moment!”

In his role, Henry manages Conestoga's Be-Dah-Bin Gamik, a Place of New Beginnings, which provides services for Indigenous students at Conestoga, including those who are First Nations (status and non-status), Metis and Inuit. It helps students with transition to college life by providing ongoing support and services that include social and cultural events and activities, un-traditional counselling services and Elders-in-Residence programs.

The women’s basketball team will host their next home game on Thursday, January 30 at 6:00 p.m.