As part of their government services learning module, students in Conestoga’s Language Instruction for Newcomers to Canada (LINC) classes recently had an opportunity to meet with MP Bardish Chagger and Senator Marty Deacon at Conestoga’s John W. Tibbits campus in Waterloo. 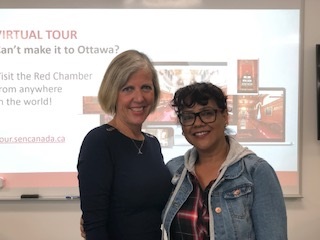 Senator Marty Deacon (left) met with participants in the LINC program at the Waterloo campus on October 9. The visit supported the students' government services learning module.

LINC provides English language classes to newcomers to assist with their integration into employment and community life. English language training is available at various levels and the program is federally-funded through Immigration, Refugees and Citizenship Canada so participants can attend at no cost.

“As they work through their modules, students are invited to indicate specific areas of interest,” explained Crystal Brown, chair, Conestoga Language Institute. “For the government services piece, they expressed interest in talking to members of government. Given student interest in the federal election, our instructors also felt it would be helpful for students to hear from government representatives themselves about their roles. We extended invites and we’re very grateful that MP Chagger and Senator Deacon could visit with our students.”

Chagger, Member of Parliament representing Waterloo, shared her perspectives on the role of an MP and the Canadian electoral process and also discussed the Human Rights Code as well as some of the legislation that’s passed while she’s held office.

During her presentation on October 9, Senator Deacon shared details about her interest in working with the senate after a 35-year career as an educator, and explained what it means to be a member of senate, before taking questions and touring the campus.

“Some of our students have been in the region less than six months,” explained Brown. “Connecting with members of government to understand how it works is important. Both guests really made a connection with our students.”

Over the last year, Conestoga’s three LINC locations in Waterloo, Kitchener and Cambridge served more than 1,100 learners representing a wide range of ages and backgrounds. LINC helps each learner set individual language learning goals, and many participants enrol in other Conestoga programs after attaining the necessary language skills.