On May 30, approximately 245 young women in grades nine through 12 participated in Conestoga’s Jill of All Trades at the Cambridge campus. The event is designed to help girls develop a better understanding of the potential of skilled trades careers. 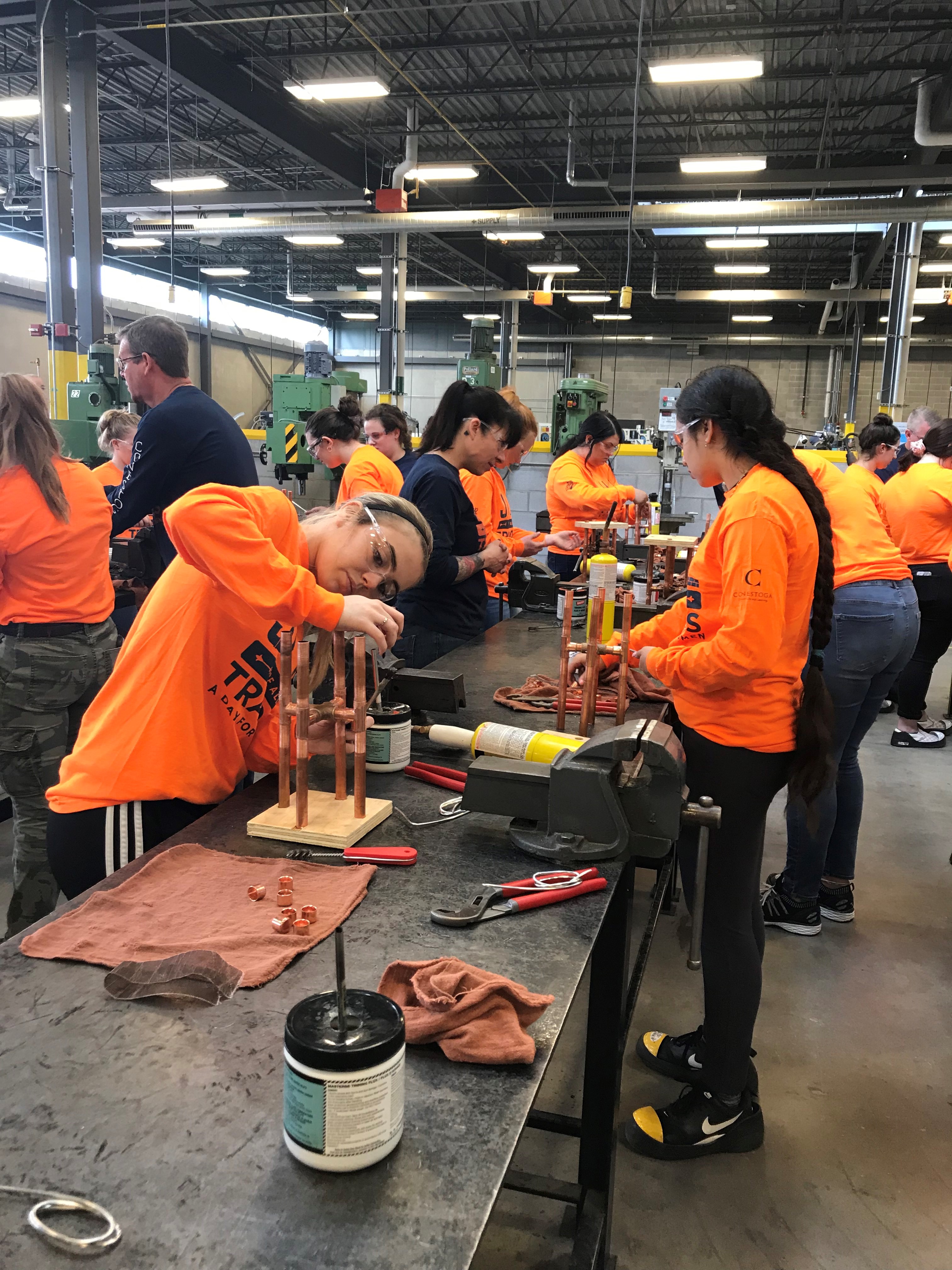 Young women participated in Conestoga’s Jill of All Trades on May 30. The event is designed to help girls develop a better understanding of the potential of skilled trades careers through hands-on workshops.

Led by female mentors, students participated in a selection of 15 different hands-on workshops that included welding, masonry, carpentry and food processing. Faculty, technicians and equipment were brought together from four Conestoga campuses - Guelph, Waterloo, Doon and Cambridge - to support the event.

During her keynote address, Blue-Collar CEO Mandy Rennehan called on students to help address the expected shortage of skilled trades workers. “There is nothing more powerful than using your mind and your hands to do something that not only maintains the Canada we started to build,” said Rennehan, “but the Canada that needs to be built for tomorrow.”

An advocate for the trades, Rennehan is the founder of Freshco, a full-service reconstruction and retail maintenance provider, and co-founder of RennDuPrat, an interior design firm based in Yarmouth, Nova Scotia. As a trailblazer in the Canadian construction industry, she was honoured as a recipient of the RBC Canadian Women Entrepreneur award in 2017, and was named one of Atlantic Canada’s top 50 CEOs the same year. The Women’s Executive Network named her one of the 100 most powerful women in 2015, 2016 and 2017, and in 2015 and 2016 she made Profit’s W100 list of Canada’s top female entrepreneurs.

“I’m calling on this room to join my movement of redefining the collar blue and changing the answer to what you want to be when you grow up,” said Rennehan. “Not only are we missing you in this very important economic transition we’re in, but we have a systemic trades shortage in Canada right now.”

For more than 10 years, skilled trades positions have consistently ranked as the most difficult to fill as the result of a shortage of available workers. Skills Canada estimates that one million skilled trades workers will be needed across the country by 2020.

In addition to Jill of All Trades, Conestoga provides programming and opportunities for mentorship to target key groups to consider a career in under-represented occupations. Go ENG Girl, Go CODE Girl, and Trades and Technology days are held at the college’s campuses for young women in high school to learn more about careers and opportunities in engineering and technology as well as the skilled trades.

Conestoga’s Women in Skilled Trades (WIST) certificate program supports low-income women who are unemployed or underemployed prepare for careers within the construction sector as a general carpenter with the basic skills required to secure a position as an apprentice, and a new Conestoga-led project called Increasing Canada’s Prosperity through Skilled Trades will see the delivery of the college’s tuition-free Welding Pre-Apprenticeship program at partner institutions across Canada as well as in the local community. Particular emphasis will be placed on engaging key groups such as women, Indigenous peoples, newcomers, persons with disabilities and other under-represented populations.

The college is also leading by example. In April, women on Conestoga’s Engineering, Technology and Trades team spent the day building with Habitat for Humanity in an effort to raise awareness about opportunities for women in the skilled trades. Led by Julia Biedermann, executive dean, School of Engineering & IT, School of Trades & Apprenticeship, and Institute for Food Processing Technology, the hope was that by showcasing how many women at Conestoga are involved in educating in non-traditional careers, it would help raise confidence for those thinking about working in under-represented occupations.

“You have an institution that you’re sitting in right now,” said Rennehan as she closed her address, “that is one of the best in the country.”

Visit the School of Trades & Apprenticeship for more information.

Visit CTV for additional coverage of Jill of All Trades: segment 1, segment 2, segment 3