Current students, alumni, representatives from local tech organizations and members of the Conestoga community gathered at Vidyard’s Kitchener office on November 22 as part of an employer recognition event. 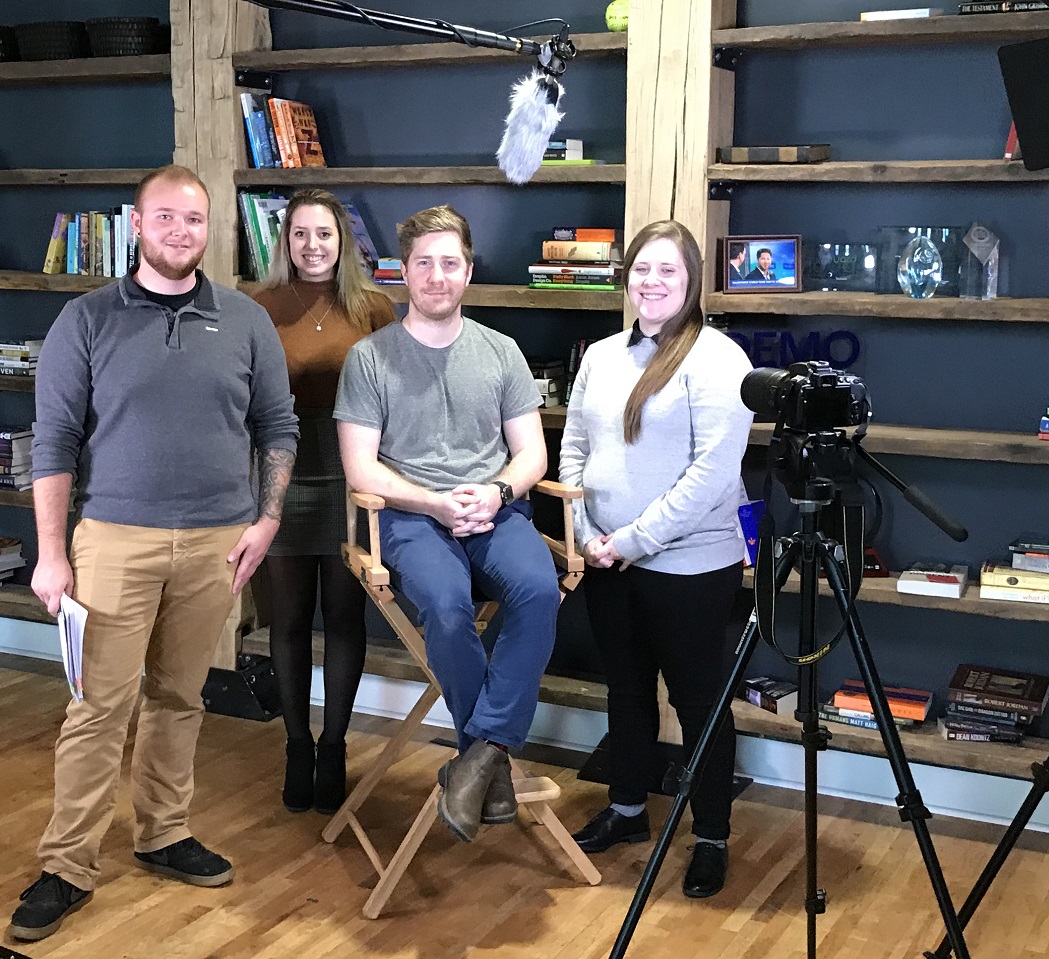 Blake Smith, third from left, is a 2010 Broadcast - Television graduate and was Vidyard's first employee. He is now one of approximately 35 Conestoga alumni working at the organization.

“We’re really pleased to be in this community, and part of that is working with Conestoga College,” said Matt Hodgson, Vidyard’s CFO. “We’re a big supporter of the college.“

Hodgson is a graduate of the Business Administration - Accounting and the Accounting and Information Tech programs, and just one of approximately 35 Conestoga alumni working at the organization. Other Vidyard employees have been drawn from a variety of programs across the college in fields of specialty that include business administration, engineering, broadcasting, graphic design and human resources.

Vidyard helps organizations drive more revenue through the use of online video and has attracted global leaders like Honeywell, LinkedIn, Citibank and Sharp to its customer base. This month, the company was recognized for its rapid revenue growth when it was included on the Deloitte Fast 50™ and Technology Fast 500™ lists. The Fast 50 program honours the 50 Canadian technology companies with the highest revenue-growth percentage over the past four years.

Vidyard’s talent acquisition lead said the organization always looks to Conestoga to hire top talent and is pleased to provide opportunities for the college’s co-op students as well as its recent graduates.

During the recognition celebration, President John Tibbits thanked Vidyard for its support of the college and its alumni and said the event was the first in a series to reach out to graduates in the community. He noted the majority of the college’s graduates - now more than 130,000 - live and work in the local community. As well, more than 3,500 local businesses are owned by graduates and contribute more than $2.3 billion to the regional economy each year.

Blake Smith, a 2010 Broadcast Television graduate, has been with Vidyard nearly eight years and is considered the company’s first official employee. Smith was featured in a video that Conestoga students produced and played during the event that highlights four Conestoga graduates who have become part of the Vidyard team.

“I started in television, but here I am working at a startup company,” said Smith. “It just goes to show that the program you’re in and the skills you’re learning don’t stop you from branching out.”

Catering for the event was provided by local business owners that are also part of the Conestoga alumni community.