Investing in the future of local food culture and fine dining

On Monday, November 19, representatives from Waterloo Region’s chapter of Les Marmitons, an international cooking club dedicated to fine food, wine and the culinary arts, presented Conestoga College President John Tibbits with a cheque for $20,000 to further support scholarships and bursaries for students in the college’s culinary and hospitality programs. 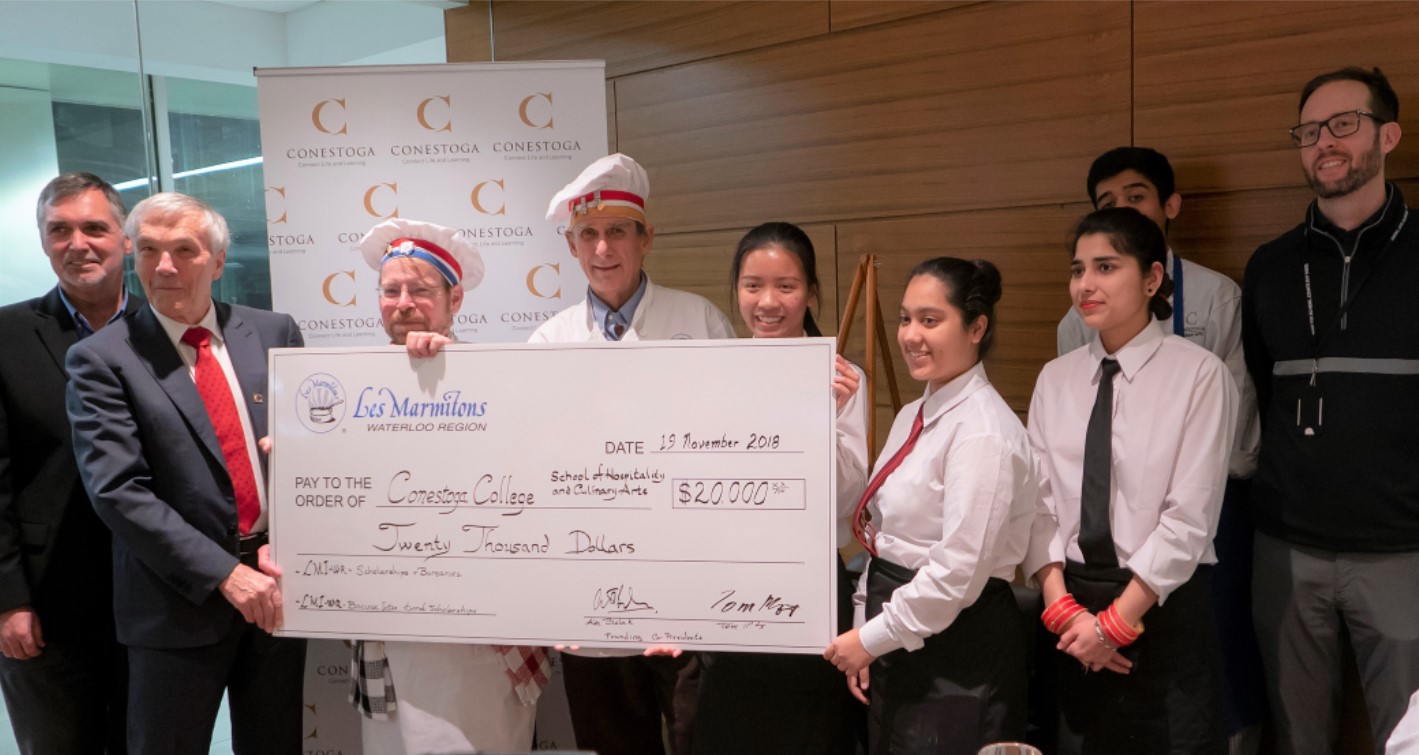 The event marked the group’s return to Bloom, the student-run restaurant at Conestoga’s John W. Tibbits campus in Waterloo. The restaurant, which has served as their club’s home base since its establishment in 2015, recently re-opened after a major expansion and transformation that includes a new modern design as well as state-of-the-art culinary labs and facilities.

“We appreciate the generous support that Les Marmitons provide for students pursuing careers in the culinary and hospitality industries,” said Tibbits. “As well as the direct support that scholarships and bursaries provide, students also have opportunities to enrich their skills and network with culinary enthusiasts as they engage with Les Marmitons members and visiting chefs.”

In addition to annual scholarships and bursaries for deserving students in culinary and hospitality programs, the club also funds an award to help offset costs for Conestoga students who participate in summer work experiences with the Institut Paul Bocuse in France.

The summer program runs from May to August each year and is open to students from the 17 member institutions of the Bocuse Worldwide Alliance. Conestoga is the only Canadian member of the Alliance, which represents the world’s top hospitality management and culinary arts schools. Participating students have the opportunity to improve their culinary skills and techniques, acquire knowledge of French gastronomy and learn from each other about their own cultures and customs.

“We are grateful to Conestoga for their partnership, which has provided Les Marmitons - Waterloo Region with great support and a terrific home base for our group’s activities,” said Alex Bielak, founding co-president of the chapter.

“Our members are very pleased to support the development of Conestoga’s students and programs as part of our investment in culinary excellence and the gastronomic future of our community,” added co-president Tom Motz.

The November 19 cheque presentation was among the last official duties for Bielak and Motz as founding co-presidents of Les Marmitons - Waterloo Region. Bryan Tank will assume the presidency of the group beginning in 2019. For more information, visit https://waterloo.lesmarmitons.com/