Partners and stakeholders from the First Nations, Metis and Inuit communities joined college leaders, faculty, staff and students at a special ceremony on Wednesday, October 31 to celebrate the official signing of the Indigenous Education Protocol developed by Colleges and Institutes Canada. 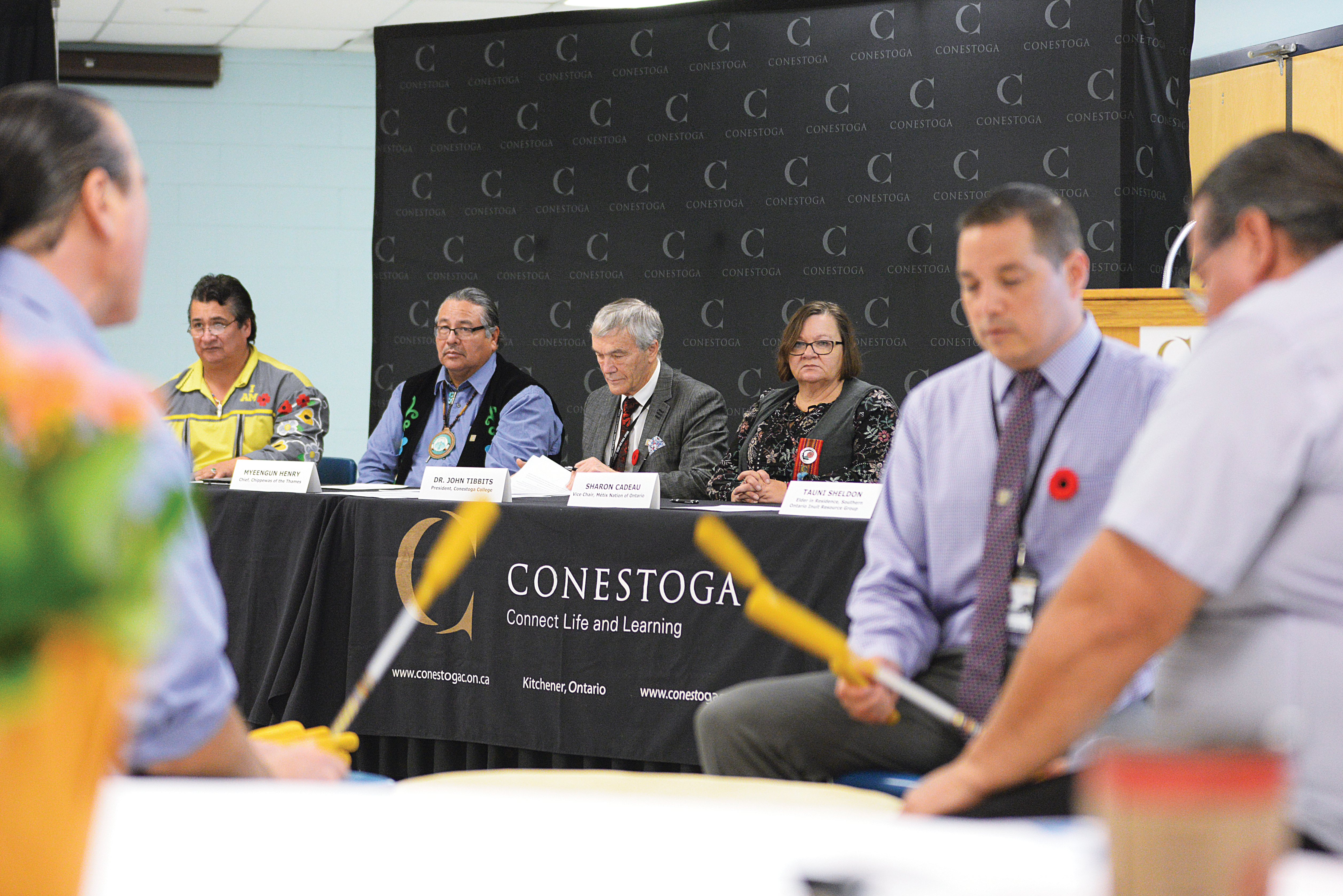 Partners and stakeholders from the First Nations, Metis and Inuit communities joined college leaders, faculty, staff and students to celebrate the official signing of the Indigenous Education Protocol.

The protocol includes seven guiding principles to address the learning needs of Indigenous peoples and support self-determination and socio-economic development of Indigenous communities. Almost 60 colleges and institutes across Canada have signed on since it was launched in 2014.

“This is the next step in a continued journey, and serves as an affirmation of our college’s commitment to Indigenous education and meeting the needs of Indigenous learners,” said Conestoga President John Tibbits. “It will provide new opportunities for Indigenous and non-Indigenous learners alike to overcome barriers, achieve their potential and contribute to the well-being and prosperity of their communities.”

Conestoga’s full-time enrolment of 16,500 includes 500 Indigenous students. The college’s Aboriginal Services Centre, established in 2010, supports the success of Indigenous students through ongoing support that assists in their transition to college life and keeps them connected to cultural traditions.

The Aboriginal Services Centre also engages the broader college community through the development of resources, activities and events that build broader understanding of Indigenous peoples and cultures, while promoting the reconciliation process between Canada and its Indigenous peoples.

For Myeengun Henry, Chief of the Chippewas of the Thames and formerly the manager of Conestoga’s Aboriginal Services, the formal signing of the protocol was a very proud moment.

“Watching today progress, and to see how it has worked out, I am so proud that I was part of this family for as long as I was,” said Chief Henry. “The things that we’ve done in this college even play into the role that I serve today.”

“We need to create a level playing field for all the people of this land,” Henry continued, “and I am so proud that Conestoga will be part of the future for all of our kids.”

In addition to President Tibbits and Chief Henry, other signatories to the protocol included Stacey LaForme, Chief of the Mississaugas of the Credit, Sharon Cadeau, Vice Chair of the Metis Nations of Ontario, and Tauni Sheldon, Elder in Residence with the Southern Ontario Inuit Resource Group.

Following the official signing of the document, participants and guests shared in a lunch of traditional Indigenous foods, including Three Sisters Soup, wild rice salad, and bannock or frybread.

To learn more about the Indigenous Education Protocol, visit Colleges and Institutes Canada.