Conestoga’s Brantford campus has been named the 2018 Champion of the Year by the Downtown Brantford Business Improvement Area (DBBIA). Karen Towler, manager of Operations and Program Planning at the campus, accepted the award on October 4 at DBBIA’s annual general meeting at Brantford’s Sanderson Centre. 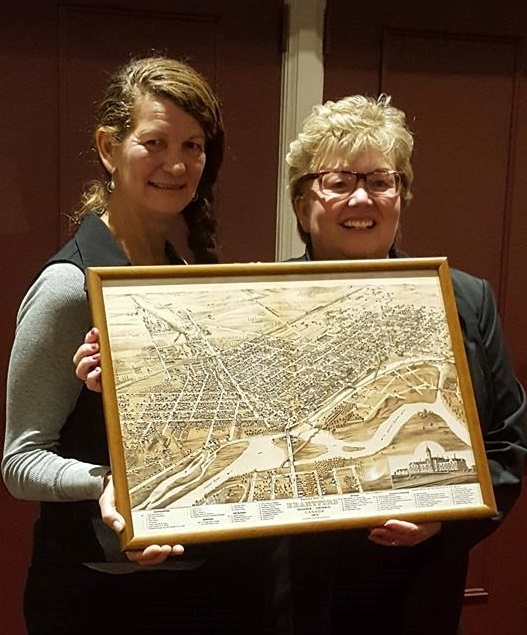 On October 4, Downtown Brantford BIA chair Keri Korfmann (left) presented the 2018 Champion of the Year Award to Conestoga's Brantford campus. The award was accepted by Karen Towler, manager of Operations and Program Planning at the campus.

The BIA, which represents more than 200 businesses and 150 properties in Brantford, established the Champion of the Year award to recognize dedication and commitment to the community. The BIA executive considers nominations of individuals or community groups who actively promote downtown Brantford as a live, work, play and learning destination, and who have successfully demonstrated excellence in community relations.

“We are honoured to have the Downtown Brantford BIA recognize our contribution to this community,” said Towler. “Brantford has always welcomed Conestoga and we are pleased to deliver programs that provide our students with the skills to support the city and local businesses.”

Conestoga was named Champion of the Year in recognition of its contribution to the community - notably the number of students it has brought to Brantford as well as its support of local businesses in the downtown area.

The college has expanded its footprint in Brantford since 2012 and recently purchased multiple properties in the downtown core which has supported an increase of students and an expansion in programming at the campus. Nearly 500 students are now enrolled in Conestoga’s Brantford programs.

In July, Brantford Mayor Chris Friel said Conestoga’s expansion meets the growing demand for post-secondary education in the city and is a primary objective of Graduate Brantford - an initiative launched in September 2018 to increase education achievement rates in the city and transition Brantford from a traditional industrial centre to a knowledge-based economy.

Conestoga now offers 17 full-time programs in Brantford and has worked with community partners to offer customized programming in academic upgrading, digital skills training, welding and warehouse essentials to link education to the employment needs of the community. Later this month the campus will also host Discover Your Future - a free, six-week program for individuals who may face barriers to accessing post-secondary education or who need help starting their post-secondary path.

The college also offers joint programming in Brantford through a partnership with Wilfrid Laurier University.