On March 8, the Conestoga community recognized International Women’s Day with an event at the Doon campus that included a presentation from Dr. Julia Biedermann, executive dean, School of Engineering & IT, School of Trades & Apprenticeship, and Institute for Food Processing Technology, who discussed her career in engineering and how feminism has impacted it. 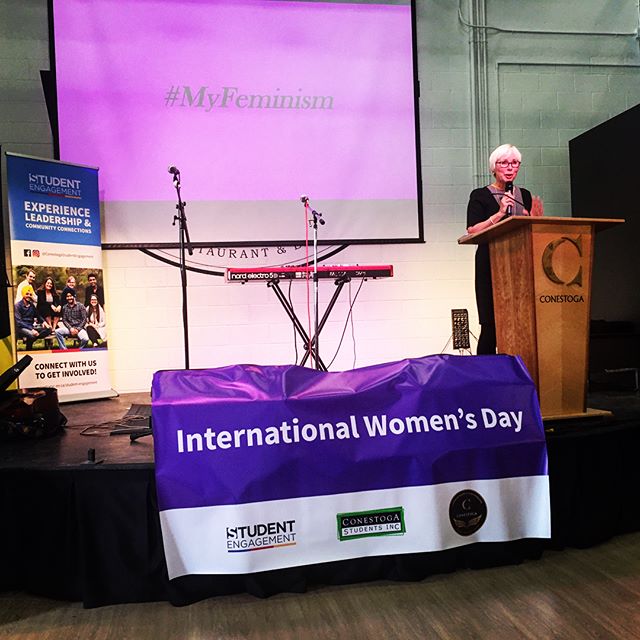 On International Women's Day, Dr. Julia Biedermann, executive dean, School of Engineering & IT, School of Trades & Apprenticeship, and Institute for Food Processing Technology, discussed her career in engineering and how feminism has impacted it.

“It really wasn’t a choice,” explained Biedermann as she recounted an experience in grade school when she had to pick an elective and was only given two options. “The reality was the girls took home economics and the boys took shop. Feeling a bit rebellious I ticked off shop on the form and that resulted in a trip to the principal’s office. I tried to argue my point … It’s not that I really wanted to take shop class. It was about trying to change a practice I found discriminatory.”

Despite the practices she encountered when she was younger, Biedermann said she never thought twice about entering a male-dominated field like engineering and now, through her role at the college, encourages other women to do the same. She supports initiatives and outreach activities to introduce young women to STEM programs: the college’s Trades and Technology Days, Jill of All Trades, Go ENG Girl and Go CODE Girl events are held at Conestoga campuses for women to learn more about careers and opportunities in engineering, technology and the skilled trades.

Before closing, Biedermann offered advice to other women in male-dominated fields: “Seek out the friendship of other women, even if that means going out of your way to find them so that you don’t feel alone and you build a support network. Don’t be self-conscious of your gender or your minority. Instead, feel empowered and special because of it. And work hard as hard work will be noticed and rewarded; however, work so that you can live, don’t live for your work.”

International Women's Day is recognized globally and celebrates the social, economic, cultural and political achievements of women. The 2018 theme of #myfeminism encouraged individuals to reflect on the personal meaning of feminism and feminists who inspire them.

Following Biedermann’s keynote, Rachael Symon, a first-year student in the Educational Support diploma program, was presented with the 2018 #myfeminism award sponsored by the Safety & Security and Student Engagement teams at Conestoga. In celebration of International Women’s Day, students were invited to reflect on the theme and submit a creative entry. Kirsty Bradley-McMurtrie, Safety & Security director, presented Symon with a $500 bursary for her vocal entry - a song titled “Being Me.”