A special edition of Conestoga’s student newspaper, Spoke, is now available on college newsstands. The edition celebrates the college’s 50th anniversary and delivers 36 pages of feature articles on Conestoga’s early days, its history and growth, as well as fun facts and alumni profiles. 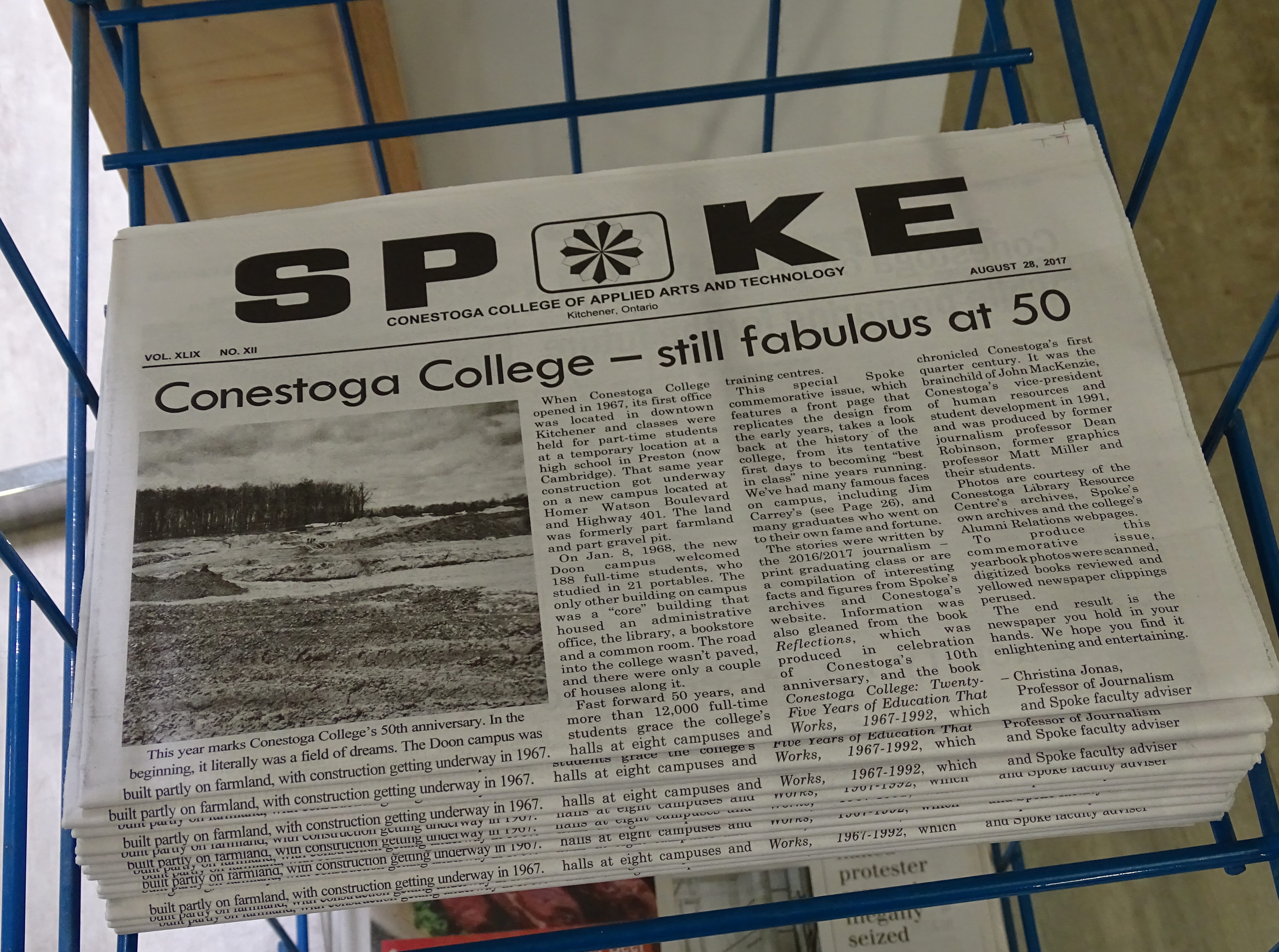 The edition, believed to have the largest print run in Spoke history at 5,500 copies, was delivered to campus newsstands on August 28. It will be available until the next issue is out on September 25 and will also be posted as a digital edition at Spoke Online. Each new student also received a copy in their Student Engagement Orientation bag.

“Producing the 50th anniversary Spoke issue was a mammoth undertaking,” said faculty advisor Christina Jonas. “When I first decided I wanted the 2017 orientation issue to celebrate Conestoga's 50th anniversary, I had no idea how many stories would need to be written, or how many hours of research it would take. What I thought would be a 12-page edition ballooned into 36 pages - the largest Spoke I have ever produced in the 17 years I have overseen production of the paper.”

Spoke is produced weekly by Conestoga’s second-year Journalism Print students who complete the August orientation issue as their final assignment. Stories in the commemorative issue were completed by the graduating class; Jonas stepped in to finalize the issue when students completed their studies last spring.

“Feedback has been excellent,” said Jonas. “People are recognizing the amount of work that went into the project and say they are learning a lot about the college's past. Few people knew that Doon classes were originally held in portables, or that the college was ranked number one nine years in a row. Readers are also enjoying the "Did you Know" pages which include interesting facts like the tornado that demolished a campus barn and a graduate who was nominated for an Oscar.”

According to the anniversary issue, Spoke was first produced in 1967 by the Council of Representatives, Conestoga’s first student association. The first issue produced by Journalism students as part of their curriculum hit newsstands on January 11, 1982.

The digital archive of Spoke is now available online thanks to a partnership with Conestoga's Library Resource Centre; browse or download more than 1,000 issues dating back to 1970.

Conestoga was founded in 1967 as part of a provincial movement to introduce a new kind of post-secondary education system to complement universities. At the time, colleges provided career-oriented programming to help graduates find and keep employment to support the economic and social development of communities. Today, Conestoga is one of Canada’s leaders in polytechnic education, delivering a comprehensive range of education and training opportunities to serve the needs of the labour market.

Join the celebrations highlighting Conestoga’s community, alumni, students, faculty, staff and partners. Visit the 50th anniversary website to share photos and memories of the college and to stay up-to-date with news related to upcoming events.