On July 30, 1977, the Conestoga College Stratford Nursing Division class of 1977 held its graduation ceremony in Central United Church. According to one of the graduates, 48 students completed the two-year program. Since graduating, they have applied their nursing skills throughout southern Ontario, Canada and around the world. 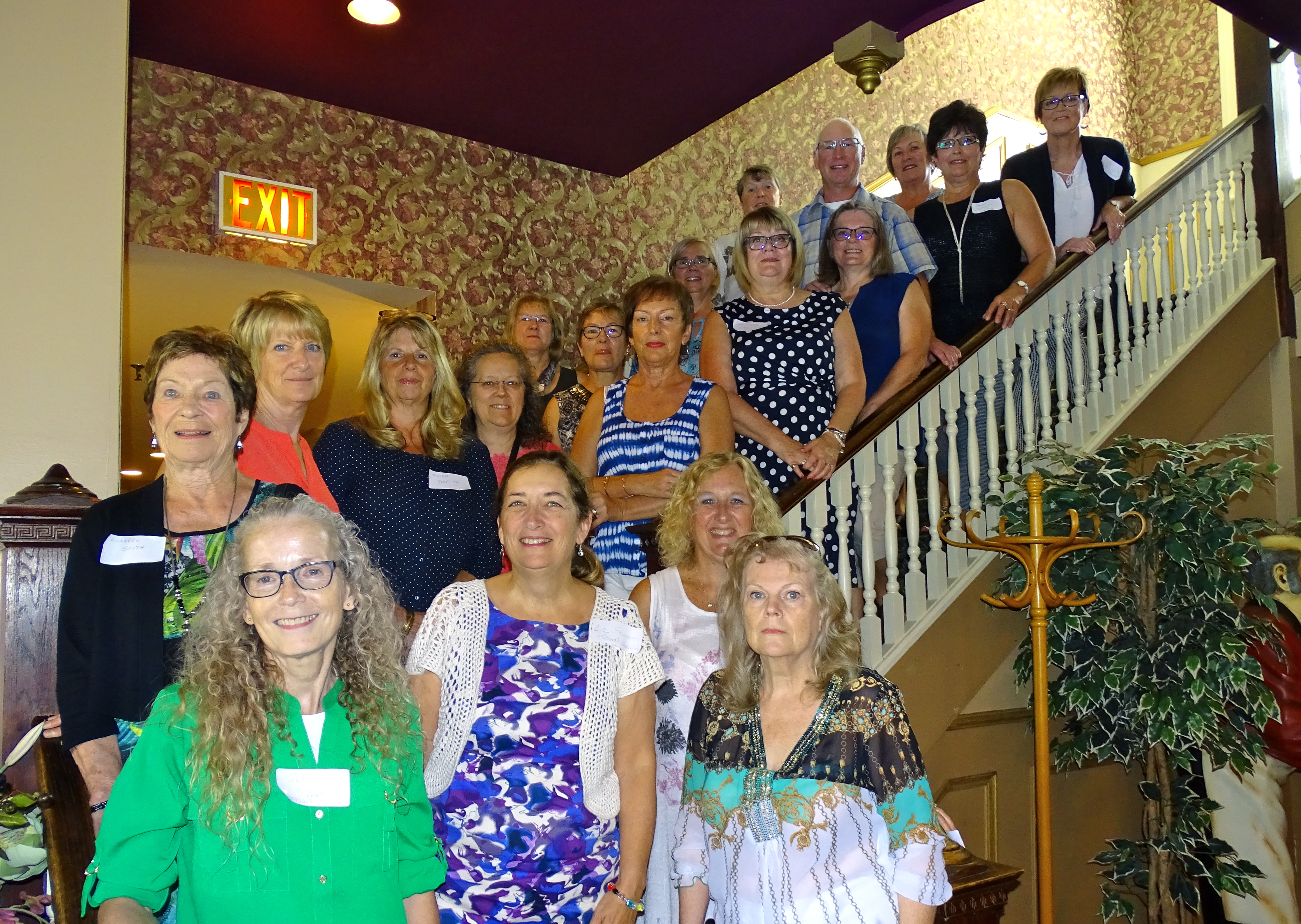 Conestoga's Stratford Nursing Division class of 1977 celebrated its 40th reunion at the Queen's Inn on September 24. The group meets every five years.

On September 24, 2017, two of the uniforms worn at that ceremony were on display as 19 of the graduates gathered at the Queen’s Inn in Stratford for a 40th class reunion. The venue was an ideal location  - it was the same spot they used to meet every Thursday night after class.

At the time, most of them - like Audrey Leis - lived in residence at the college’s Stratford campus at 130 Youngs Street. Tucked among the memorabilia Leis brought to the reunion were envelopes with her campus mailing address. “There,” she said, pointing to a yellowed envelope. “I stayed in room 341.”

Leis also had her Conestoga student card and a price list for her text books. All 12 texts cost a total of $123, with Medical-Surgical Nursing ringing in at $20.35 and Fundamentals of Nursing priced at just $10.50.

Nancy Switzer’s college scrapbook included her acceptance letter and the first cap she wore in an operating room as a student. The blue paper cap was folded neatly in the book and beside it was a note Switzer had later written: “Who knew this would light a spark and be my life-long career?”

In 1973, responsibility for the four regional schools of nursing was transferred to Conestoga as part of a general transfer of nursing education to colleges of applied arts and technology. The college celebrated its first graduating class of nurses in 1975.

The Stratford Nursing Division Class of 1977 meets every five years and graduates share responsibility for organizing the event. This year, Betty and Stuart Lealess took a turn. The pair have their own special Conestoga story: Stuart met Betty while they were at college and the two been together ever since.

Although Stuart, the class valedictorian and just one of two males in the program, had doubts about what career path to take after high school, he was hooked on nursing immediately after his first class visit to an operating room. “I was in the OR and I knew that’s where I wanted to be,” said Lealess. Like Switzer, he’s worked as an OR nurse for more than 30 years.

While many of the graduates have stayed in southern Ontario, others have ventured off across the country. One graduate works as an OR nurse in the Yukon, and another, Liz Scamen, left for British Columbia. She missed other reunions because of the move, but was able to make the 40th now that she’s living back in Ontario.

“We could walk past each other on the street and not recognize one another, but when we see each other now it’s like we never lost time,” said Scamen.

She noted that many grads left to work in the U.S. in the late 70s, but others, like Marilyn McIlroy, left to provide care and aid overseas. McIlroy spent a year in Haiti as a volunteer nurse and returned there again full-time for 11 years in 1983 to support medical missions. She has worked with other medical teams in El Salvador and Tanzania, and still picks up casual nursing shifts here in the region to keep her skills current. 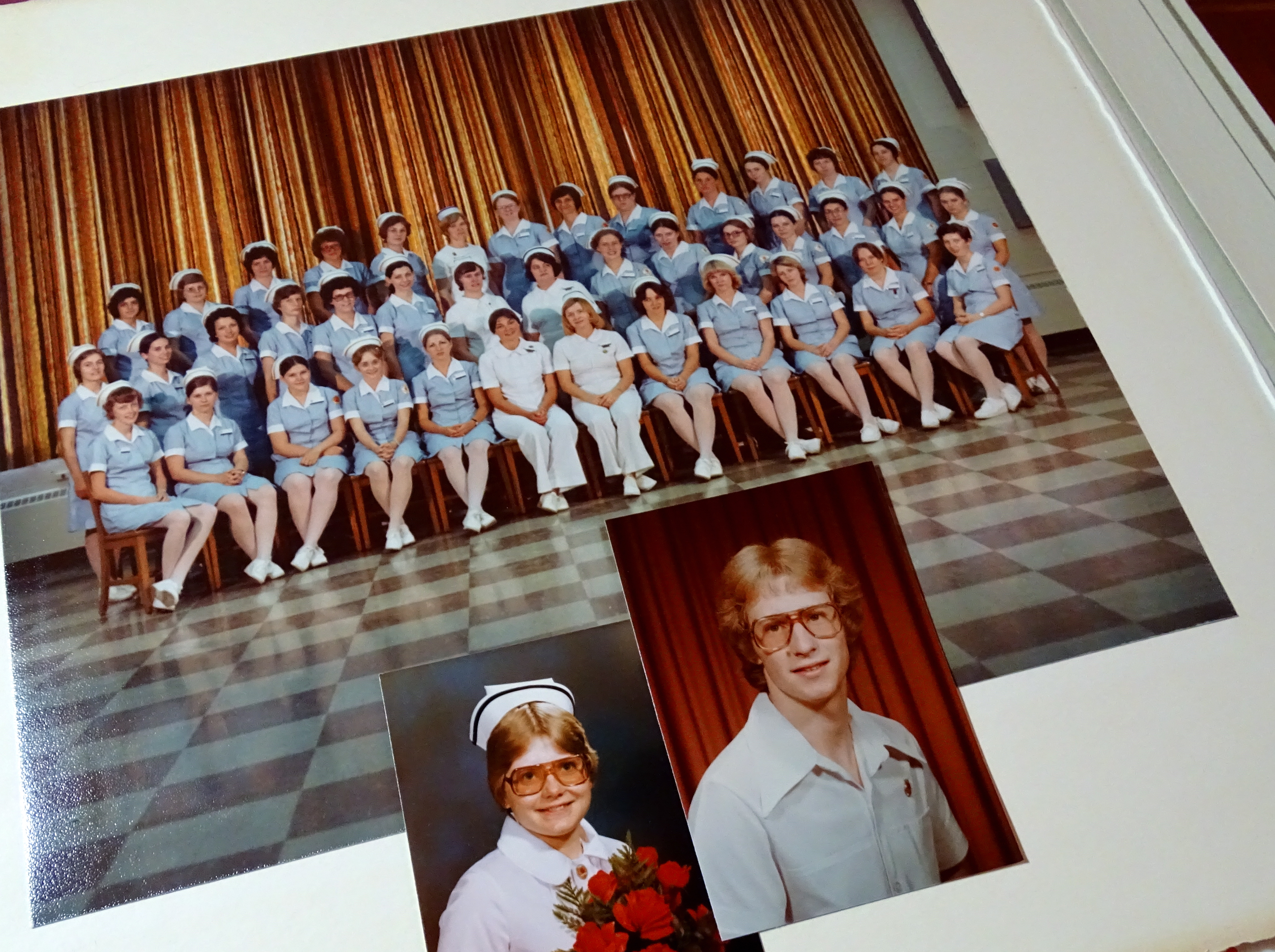 Betty and Stuart Lealess, pictured here during their college days, met at Conestoga and organized this year's reunion.

Although McIlroy shows no signs of slowing down - she has another mission planned this fall - other graduates have their eye on retirement. Some have even inspired the next generation of health care professionals. In 2001, Conestoga became a partner in a Bachelor of Science in Nursing program with McMaster University and Mohawk College. Leis’ daughter, Emmalene, is a 2007 graduate of the program.

While the graduates reconnected over lunch and shared updates and stories, old photos and yearbooks were laid out for viewing. One yearbook was left open to a page titled “A Message to our Instructors.” The last paragraph reads: We will always remember the guidance and friendship you have given us. Though words are inadequate to express our true feelings, you will always be gratefully remembered.

This year marks the 50th anniversary of the establishment of Conestoga in 1967. The college now delivers a comprehensive range of career-focused programs including diplomas, degrees and post-graduate certificates to serve the needs of more than 12,500 full-time students. More than 118,000 Conestoga alumni live and work around the world.