On May 2, students from 18 technical diploma programs showcased their capstone projects at the Cambridge campus for Tech@Work. The projects captured the full set of skills acquired by students throughout the course of their program, and were recognized as the best final year projects in each program area. 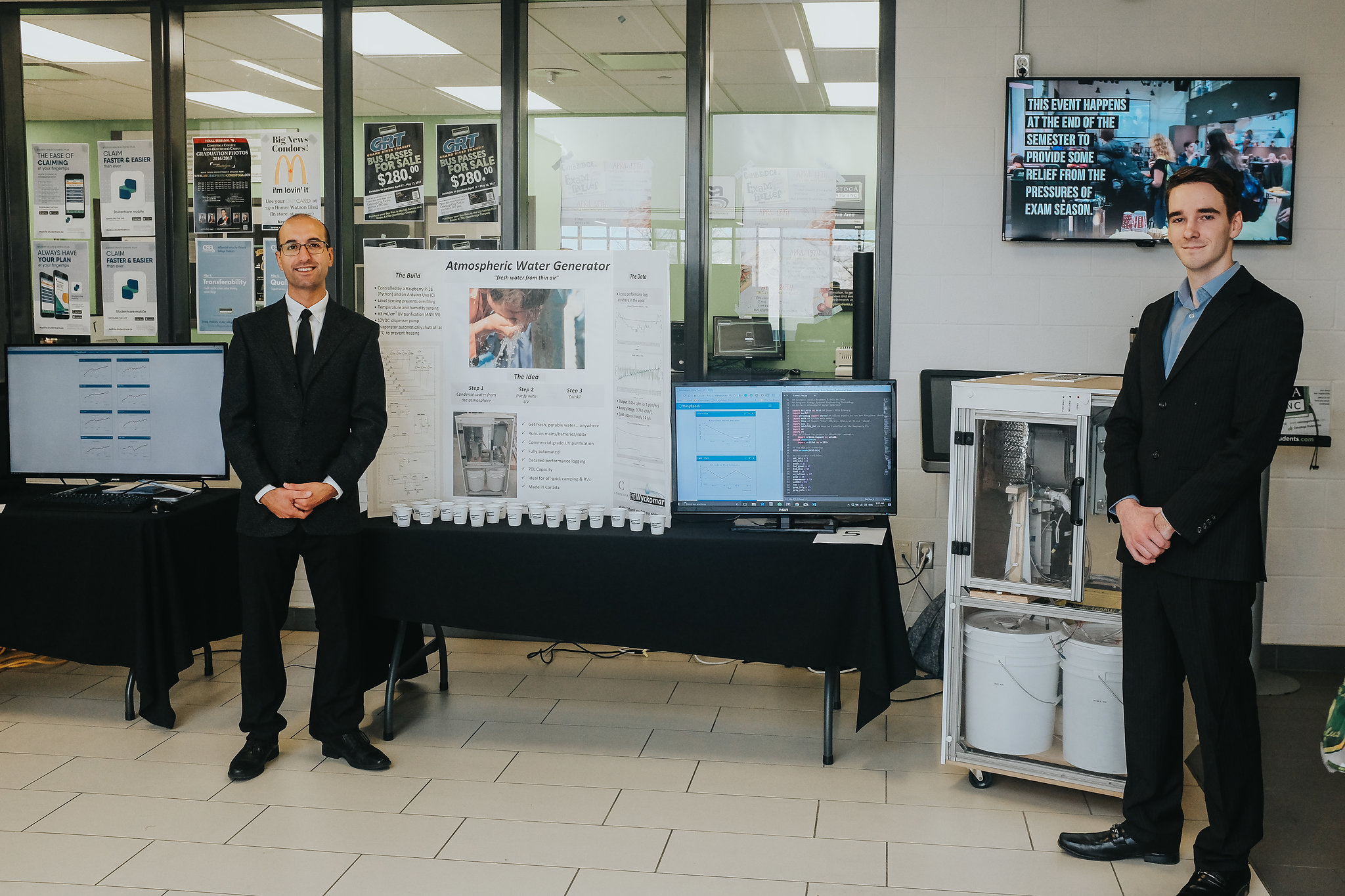 Eric Wallace and Jessie Boudreau showcased their capstone project, the Atmospheric Water Generator, at Conestoga's Tech@Work on May 2. As winners of the event, they will be awarded the college's Mastercraft award.

Judges awarded the top prize to Energy Systems Engineering Technology students Jessie Boudreau and Eric Wallace for their Atmospheric Water Generator. To recognize their achievement, Boudreau and Wallace will be honoured with the college’s Mastercraft Award at convocation this June. Established in 1980 by former Conestoga president Kenneth E. Hunter, the Mastercraft award includes a cash award of $1,000.

"We were surprised and delighted when we heard that we won the Mastercraft award. The field was very strong this year and we went in only hoping to do our best,” said Wallace. “It is a tremendous honour."

The Atmospheric Water Generator condenses moisture from the air and pumps it through a chemical-free UV filtration system to produce perfectly potable water. Its dual-power design, compatible with both mains (120VAC) and solar PV power (12VDC), makes it ideal for both home and portable applications, such as off-grid living, camping and RVs.

“The concept is simple,” said Boudreau when he explained the project. “Generate water from thin air."

In making its decision, the judging panel said the winning project was well executed and the team’s ideas for manufacturing a commercialized version, and the potential markets for it, demonstrated their commitment and passion for their work.

Boudreau said the concept for the project came while working with the Erwin Hymer Group North America (formerly Roadtrek Motorhomes).

“After working on a project to provide customers with greater energy storage capabilities to go off-grid with their motorhomes indefinitely, we continued to work towards the goal of providing our customers with complete off-grid capabilities wherever they go,” said Boudreau. “During a brainstorming session outside of work, Eric and I realized the only thing currently preventing RV owners from boondocking indefinitely was their lack of accessibility to fresh water. We decided to work towards fixing this problem.”

The pair received a donation of a UV purifier from Guelph-based Wyckomar UV Purification Systems, and now that they have a working prototype for the project, Boudreau and Wallace hope to pursue the concept.

“We think it's a solid idea,” said Wallace. “We'd like to shrink it down and get it into a more portable form factor. Lowering the overall cost would obviously be a big priority as well."

Other projects included Ant21 - an event management app; IntelliGrow - a smart gardening system to measure soil pH, moisture and temperature; eaterator.com - an app that allows users to search for recipes based on what they have in their kitchen; Bright Beats - a drum lighting system; and a console designed by Woodworking student Vincent Solis.