Students in Conestoga’s Mobile Solutions Development graduate certificate program have developed an iOS smartphone application that tracks Grand River Transit vehicles throughout Waterloo region. They now plan to broaden the scope of their work to capture transit services across the province. 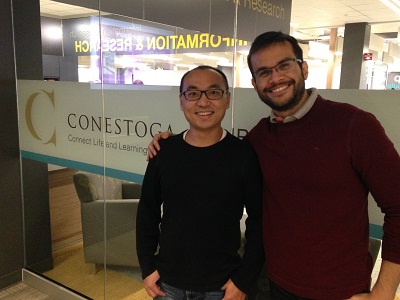 Students Rui Geng, Jaspreet Janjuha and Emmanuel Dos Santos developed the app, called Time2GO, using open data available from the Region of Waterloo. Open data is free and allows the public to access data easily in order to inspire innovation in the community.

Time2GO improves transit accessibility by providing the user real-time information on buses, routes, maps, trips and schedules. The application works by allowing the user to choose a route, track a particular bus along that route in real time and be notified through a smartphone or smartwatch when the bus is about to arrive at the user's stop.

Geng, a transit user, suggested the idea to his classmates for their capstone project. “I use transit every day and right now there isn’t a tool to let me know where my bus is,” said Geng. “Schedules let us know when a bus is supposed to arrive, but our app provides the physical location of the bus so you actually know where it is and when you need to be at your stop.”

Geng, Janjuha and Dos Santos started work on the app last September during Conestoga’s first-ever Accessithon - a hackathon aimed at the creation of human-computer interaction solutions that enhance our quality of life. They created a prototype of the app and were recognized for developing the Most Technically Challenging Solution at the event.

The students continued to work on Time2GO throughout the term and were recognized again when their capstone was deemed the best in the program. They will move on to compete at Conestoga’s Tech@Work, which features the best capstone projects from more than 15 technical diploma programs.

"It has been a pleasure working with the students on this project. They worked tremendously hard for the entire term, first creating a prototype at Accessithon, and then continuing to work on their project as smartphone and smartwatch applications,” said faculty member Dalibor Dvorski. “It stands not only as a great example of capstone project work but also as an example solution that uses open data sets from our region and elsewhere."

Geng, Janjuha and Dos Santos, all international students, completed the program in December and found employment with local tech companies; they were attracted to Conestoga due to its location in Canada’s tech and innovation hub.

“The college and our professors are really connected to companies in the region,” said Dos Santos. “Their involvement has been really helpful and it’s opened doors for us.”

The group plans to continue work on the app and use open data from other transit services in the province, including the Toronto Transit Commission and GO Transit. If they can find financing to support the project, they hope to deploy it to the public.

Mobile Solutions Development is a four-semester graduate certificate program that includes a one-semester exploration of career management or an optional co-op in the mobile software industry. The program offers students a strong practical background in mobile solutions design and development that encompasses different devices, operating systems, database and network infrastructures, as well as coverage of software quality and the security aspects to mobile solutions development.