The Ontario Colleges Athletic Association (OCAA) has named Conestoga’s Brittany Bell the Women’s Softball Player of the Year. She received the award on October 20 at a ceremony held in Kitchener. 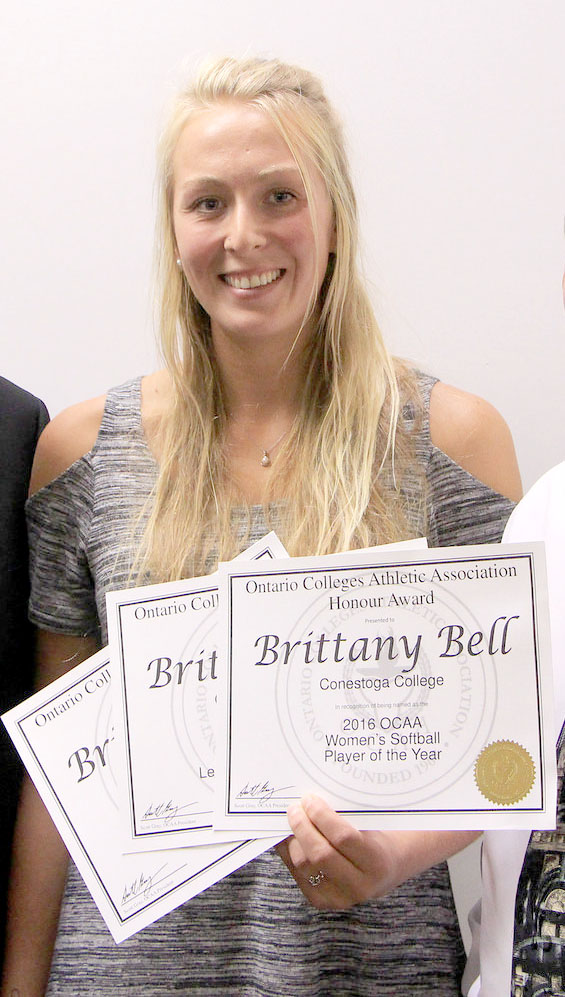 Bell, a student in the Personal Support Worker program, has been on Conestoga's softball team for three seasons and plays second base. In addition to Softball Player of the Year, she was named the league’s batting champion and a league all-star. Earlier in the season she was named an Athlete of the Week by the OCAA.

“The only players that attended the ceremony were the ones receiving awards so I knew I was probably on the all-star team, but getting called for top batter and player of the year was a big surprise,” said Bell. “I could never compare myself to all the other great softball players in the OCAA so it was a real honour to receive player of the year -- I still get excited thinking about it.”

Throughout the season, Bell led all OCAA players with a .500 batting average with 29 RBI, 71 total bases and eight doubles and was among the league all-stars with 39 hits and 25 runs. She has earned a spot on the all-star team each season she has played and was named top batter in 2015.

“I really just play with all my passion and heart and leave it all on the diamond,” said Bell when asked about the season. “I can’t say I played harder than any other year, so I was really happy to get the award. Softball is a big part of my life and family -- my brother played with the Toronto Blue Jays farm team, so it was nice to have a good season and do well myself. It’s hard always competing against him.”