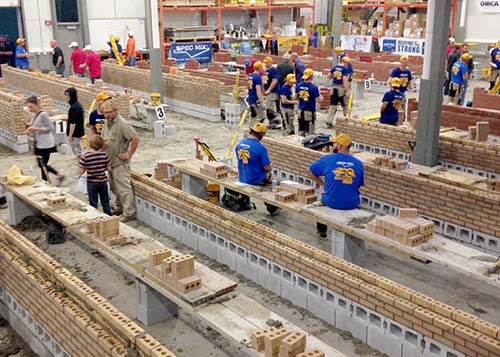 Conestoga's Waterloo campus hosted the Ontario regional Bricklayer 500 competition on October 5 where the province's best stone masons competed for a chance to participate in the world championship.

The Bricklayer 500 was established by SPEC MIX, Inc. in 2003 to showcase the skill and craftsmanship of professional masons. Winners from regional competitions held at 22 locations throughout Canada and U.S. advance to the World Championship in Las Vegas on January 18, 2017.

Conestoga was just one of four Canadian locations to host a regional competition and students from Conestoga’s Brick and Stone Fundamentals program volunteered their time to support it. Spectators included industry donors and partners.

“This was the ninth year Conestoga’s faculty and students hosted the event,” said faculty member Rene Letoile. “Students applied their skills by mixing mortar for the teams and during the competition they had the chance to see close up what they are striving to be able to do, while meeting industry partners and making contacts.”

This year, seventeen teams competed in the challenge which requires competitors to build a 26 ft. wall. Each team of two includes a bricklayer and mason tender and the win goes to the team able to lay the most bricks in one hour. Brick counts are deducted if judges spot poor workmanship.

This year’s the first-place winner finished with 596 bricks.

The School of Trades & Apprenticeship delivers a comprehensive array of skilled trades programs through campuses and training centres in Kitchener, Cambridge, Waterloo, Guelph and Ingersoll.