At a League of Champions event held at the Waterloo campus on October 3, students in Conestoga’s Construction trades programs pledged to help make Canada a safe workplace. 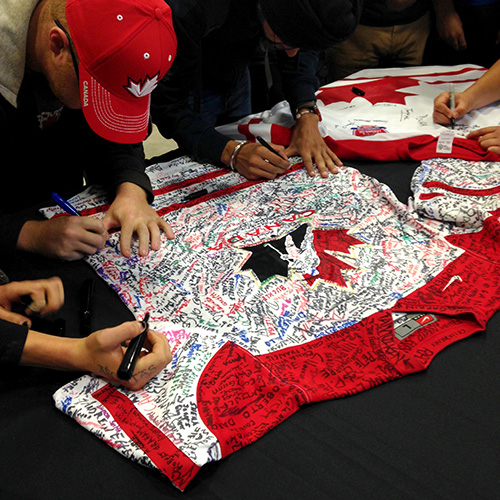 Students signed the Jersey of Courage to support the League of Champions and pledge their commitment to making workplace safety a priority in Canada.

The event was presented in partnership with the Grand Valley Construction Association and featured guest speaker Rob Ellis who shared the story of his 18 year-old son David. David died in 1999 following a workplace accident; he was pulled into the blades of an industrial mixer on his second day of work, having received only minimal training on the equipment.

“Last year 125,000 young people in Canada were injured on the job,” said Ellis. “And that’s only the number that was reported … I don’t want anyone here, as my family at Conestoga, to go through what we went through.”

Ellis launched MySafeWork, a non-profit organization, after David died. With a mission to prevent workers from getting injured and killed at work, Ellis engages in national outreach activities to remind students to work for companies that provide safe work conditions and inspire companies to improve and promote a safety culture.

“If you see something, say something,” said George in response to a question about what the college community could do to take action. “Report incidents to a foreman and don’t accept unsafe work conditions. Also remember to help others on your work site; you need to look out for each other.”

Other student questions focussed on how to protect new Canadians in the workplace who may be unfamiliar with Canadian legislation, and what to do for vulnerable populations, like single parents, who may not be in a financial position to refuse unsafe work.

Before ending the presentation, Ellis invited students to sign the Jersey of Courage - a safety charter created to engage students and employees. Each signature represents a commitment to making Canada the world's safest place to work.

Signatures from Conestoga employees and students are among the 600,000 signatures Ellis has collected to date.