More than 200 young women in grades nine through 12 participated in Conestoga’s third annual Jill of All Trades, held at the Cambridge campus on June 1. 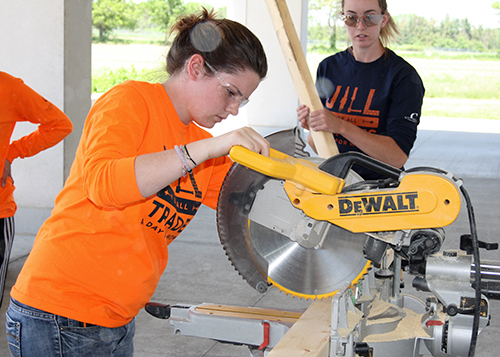 More than 200 young women had the opportunity to try trades including woodworking, masonry, plumbing, and welding during Jill of All Trades.

Funded by the Ministry of Training, Colleges and Universities and presented in conjunction with the School College Work Initiative - Grand Connections regional planning team, the event offered a full day of hands-on workshops led by female mentors. The workshops - eleven in total that ranged from carpentry to welding and electrical - allowed the young women develop a better understanding of the potential of skilled trades careers. The students were drawn from 10 regional school boards.

“Today is about trying new things, learning about the potential of a career in the skilled trades and breaking stereotypes. It’s about being challenged, meeting successful women who work in skilled trades and it’s also about having fun,” said Trades & Apprenticeship chair Suzanne Moyer as she welcomed the students.

Paul Lafrance, star of HGTV’S Decked Out, Disaster Decks, Deck Wars and Canada’s Handyman Challenge, delivered the keynote address and reminded the girls of the unique opportunities available to them.

“Women are natural communicators - use that gift,” said LaFrance. “If you’re standing next to a guy and you both have skill to do a trade, who do you think will have the upper hand? It’s the person who can communicate. You can have all the skill in the world, but you’ll still fall flat on your face unless you can resolve conflict and connect people.”

LaFrance also reminded the students they represent an answer to the shortage of skilled tradespeople Canada is expecting over the coming years; he described it as a shortage so significant it will prevent Canada from keeping up on a global scale.

He acknowledged the stigma of the trades industry being male-dominated is slow to change, but encouraged the girls to stand up against it and support each other.

“Real men will stand behind you and push you forward. The greatest opposition to women moving forward is not the boys, it’s the other girls. Competing with each other is your greatest enemy. If you fight for each other you won’t just be great, you’ll be explosive.”

While the students took part in their workshops, school board representatives and other community partners toured the Cambridge campus. While on tour, Jeff Piro, Pathways coordinator for Avon Maitland District School Board, noted Jill of All Trades has become so popular with students in his district that registration is full within three hours. “The response to the day has been awesome,” said Piro. ‘Most campus visits involve a tour and a talk, but with this being hands-on the students are actually doing something and challenging themselves. The girls are also provided with the orange Jill of All Trades t-shirts to wear and that's unique too. It creates a sense of empowerment that says “I belong.”‘

The School of Trades & Apprenticeship delivers a comprehensive array of skilled trades programs through campuses and training centres in Kitchener, Cambridge, Waterloo, Guelph and Ingersoll.