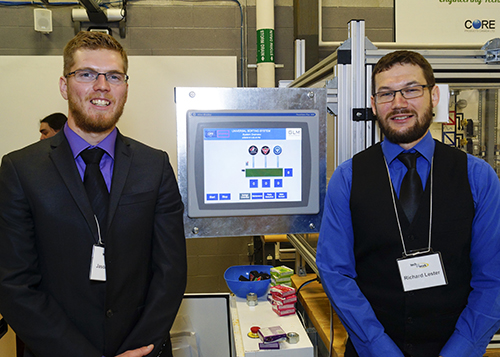 During the showcase students demonstrated their work to family, faculty and industry partners, and explained the scope and challenges involved in completing the projects. Each project captured the full set of skills acquired by the students throughout the course of their programs, which ranged from Electrical Engineering Technology to Woodworking.

Projects on display included a proposed Bass Pro shop, a soil moisture monitoring system and a drone spotter, which was developed by Embedded Systems Development students Sahil Kaushal, Khushi Khushi and Harprett Singh. The spotter uses an embedded microphone to detect drones that may be flying in restricted areas like prisons or private residences. The team of students said the greatest challenge was determining basic requirements of the project, but now hope to find investors and commercialize their product.

In reviewing the projects, judges considered innovation, creativity, skills and the quality of each project before awarding the top prize to Electrical Engineering Technology students Brandon Martin, Richard Lester and Jason Green for their project titled Universal Sorting System. The students described their project as a conveyor-based sorting system which uses an Omron smart camera to accurately identify a variety of different parts and then sort them accordingly.

As a result of their win the three students will be honoured with the college’s Mastercraft Award, which will be presented at convocation this June. Established in 1980 by former Conestoga president Kenneth E. Hunter, the Mastercraft award includes a Coat of Arms and a cash award of $1,000.

The judges also gave honourable mentions to Mobile Solutions Development students Anton Bazhal, Bruno Finelli and Yevhenii Odzhubeiskyi for their project called Keepr and to Kathleen Montgomery from the Woodworking Technician program for her storage unit called the Step Shelf.