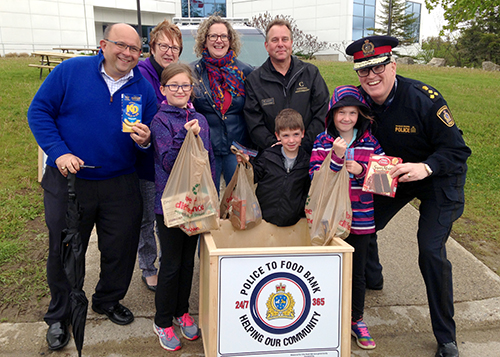 “Conestoga College, we couldn’t have done this without you and your students,” said Larkin. “There’s a great message here: students can have an excellent trade and make a difference by using their skills to help the community.”

The food bins were built by first-year Renovation Technician students under the direction of faculty member Doug Lockston and will be placed in police divisions throughout the region to collect food donations. The bins will serve as a reminder to community members that donations are needed throughout the year -- the Food Bank of Waterloo Region estimates that one in 20 households in the community need food support annually.

“This comes out of a challenge from Chief Richard Hepditch of the Waterloo Fire Department,” explained Larkin. “After launching Fire to Food Bank he made a challenge to public safety agencies to do the same. We agreed as a police service to be the first service in Ontario to launch Police to Food Bank in support of the Food Bank of Waterloo Region.”

Larkin also plans to share the initiative with members of the Ontario Association of Chiefs of Police to encourage other police agencies across the province to support people in need.

“My students spent their own time building the bins and it was really great to see them come out and gel as a team and put these together,” said Lockston. “It made it even more important to them to know they were putting these bins together for their community and for such a great cause.”

This month the Food Bank of Waterloo Region launched the Every Plate Full campaign, which aims to raise food and funds to provide 95,000 meals. Food donations are at their lowest from June to August and Wendi Campbell, executive director of the Food Bank, said the food bins will increase awareness in the community about the need for continued support.

Conestoga’s Renovation Technician two-year diploma program prepares students to enter into a career in the residential and light commercial construction sector. Students learn how to apply their technical skills to solve a number of construction and renovation challenges. The program incorporates all aspects of construction from foundations to framing and finishing.