More than $50,000 was raised at Conestoga’s 21st annual Golf Classic, held May 17 at Whistle Bear Golf Club. This year 116 golfers attended the event which recognizes and honours community and business leaders while supporting development projects at Conestoga. 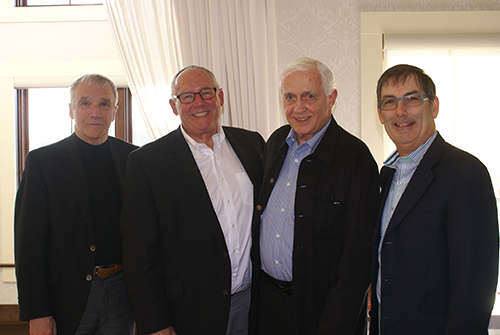 Since its inception the Golf Classic has raised more than $1 million. Funds from this year’s tournament will be directed to the college’s School of Business.

Davis joined the retailer more than four decades ago and has held increasingly responsible managerial and executive positions accountable for dealer support and development, marketing, IT, dealer finance and legal services, administration and strategic planning.

Between 2010 and 2014, he served as executive vice president and chief operating officer and was appointed to chief executive officer in May 2014. Davis has proven himself to be a great leader and an innovative executive who embodies the qualities of value, service and dependability.

At Conestoga, Home Hardware has been a long-time supporter of the Interior Decorating diploma program. The company provides an annual donation to the Chairity Gala, a community fundraising event organized and hosted by students. Home Hardware has also offered student co-op placements, donated paint chips and classroom supplies and supported other learning and networking opportunities.

To learn more about how you can support Conestoga students and programs, visit the Development website