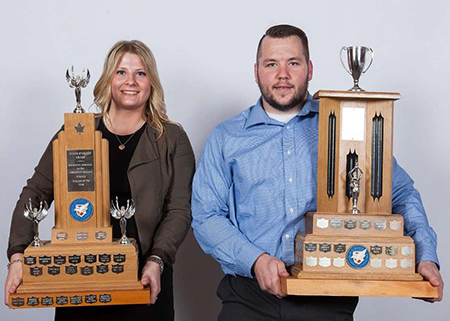 Jennifer Farquhar and James Innis were named Conestoga’s top athletes of the year at the annual Athletics Banquet held on April 6.

Men’s rugby player James Innis was named Male Athlete of the Year. Innis, from Collingwood, plays the 8 man position for the Condors. He participated in every match over the last two years and helped his team make the playoffs for the last three years. The team won a bronze medal in 2013. This year Innis was the OCAA west division scoring champion scoring eight tries in five games. He was also named an OCAA all-star the last three years.

In addition to being named athlete of the year, Innis was also recognized as the team’s MVP for the second year in a row.

Jennifer Farquhar was named the Female Athlete of the Year. Farquhar, from Waterloo, has been a member of the women’s outdoor and indoor soccer teams for three years. On the outdoor team she played midfield and striker, and served as co-captain for two years. Farquhar helped lead her team to the playoffs in all three outdoor seasons, scoring 10 goals and numerous assists during that time.

Other MVP and coaching awards were also presented at the banquet and the OCAA all-academic winners were recognized.