Faculty and students from Conestoga’s Interior Decorating diploma program hosted the fifth annual Chairity Gala at the Waterloo Region Museum on March 22. More than 230 guests had the chance to bid on refurbished chairs with proceeds going to Habitat for Humanity. 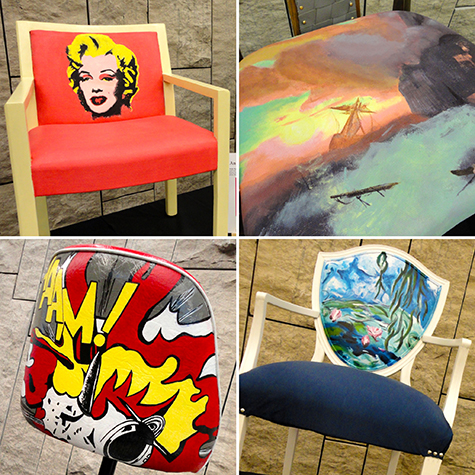 Nine chairs that were designed and refurbished by Interior Decorating students were sold through silent auction at this year's Chairity fundraiser event, with proceeds going to Habitat for Humanity.

Chairity first launched in 2012 when Interior Decorating professor Leslee Squirrell came up with the idea to have second-year students in her program take old, unwanted chairs and refurbish them. The pieces are then sold through an auction, with proceeds going to local charities and non-profits. In past years the event has supported the Hospice of Waterloo Region, women’s shelters operated by the Women's Crisis Services of Waterloo Region and Special Care Nursery at Guelph General Hospital.

“I give the students a theme each year and this time I had them interpret a famous painting,” said Squirrell. “Look at the results - I think we may have our best year so far.”

In addition to supporting a good cause, Squirrell said the task requires students to apply a number of skills that include working as a creative entity and applying design principles like proportion and colour use.

Students Stephanie Nagel, Vaerie St. Amour and Maddie Perette chose to interpret marine artist Ivan Aivazovsky’s A Shipwreck near Mount Athos. “The painting alone took hours,” said Nagel. “We used layers and layers of paint to get the look we wanted.” She credits her group’s knowledge of the elements of design to help complete the chair, which went through a number of changes before the team settled on the final look. They worked on the piece throughout the duration of a semester.

Other teams were inspired by Andy Warhol’s Marilyn, Vincent Van Gogh’s The Starry Night and Gustav Klimt’s Woman in Gold. Nine student chairs were sold through a silent auction, while six other pieces, designed by faculty and local designers were sold through a live auction. Funds were also raised through a raffle that featured nearly 40 items.

Conestoga’s Interior Decorating diploma program provides students with the opportunity to develop interior decorating skills and knowledge for residential, retail and commercial environments. Students are introduced to the latest computer applications, the effective use of materials, the elements of design, lighting and acoustics and to the concept of universal design.

Conestoga is the only college to offer Interior Decorating graduates the opportunity to earn a second two-year diploma in Visual Merchandising Arts in just one year.