On March 4, second-year students in the Visual Merchandising Arts program hosted Conestoga’s sixth annual aWEARness runway performance at the Doon campus library. The fundraiser featured 18 costumes made entirely out of paper to represent the show’s theme: Paper with Purpose. 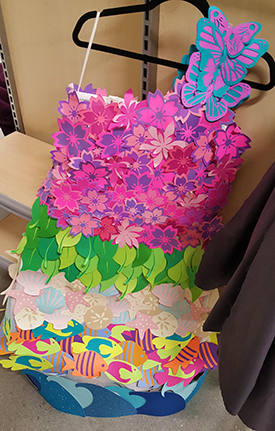 Shauna Wiley's design was inspired by Vladimir Kush, and her sister, Mauryah, who is battling Lyme disease.

Taking inspiration from a designer or artist of their choice, students starting working on their designs last summer and the final results were as varied as the types of paper they used. Paper plates, newsprint, napkins, tissue paper, card stock and sketch paper were carefully crafted into pieces of unique wearable art. More than 250 guests lined the runway to view the costumes which ranged from delicate, feminine dresses to structured sculptural pieces.

“We’ve been working on all the details for this show,” said student Sabrina Harji in the Visual Merchandising Arts studio days before the event. “We managed the décor, the signage, tickets and postcards. We also have first year students working with us so they get a feel for how things run before it’s their turn next year.”

Both the costume creation and the runway performance provided students with an opportunity to apply the skills they learned in class to stage and host a real-world event. They also worked with Broadcast Television students to create videos that were played prior to each model walking down the runway. The video introduced the costume, the student behind each design and the challenges encountered throughout the creative process.

“The most difficult part to this project has been working with paper: it rips!” said Jaden Johnston, who based her costume on the work of designer Alexander McQueen. Johnston used chicken wire for the base of her piece and then built it out using tissue paper.

Another student, Shauna Wiley, based her costume on contemporary Russian painter Vladimir Kush, who uses bold colours and elements of nature -- like flowers, butterflies and seashells -- in his work. Wiley incorporated the same elements into her costume by wrapping the bottom in bright blue waves made out of card stock and attaching paper butterflies to a head piece to represent the sky.

The design was also influenced by Wiley’s sister, Mauryah, who is battling Lyme disease. While seeking treatment in Florida her sister took walks along the beaches and collected seashells as way to relax. The waves and pastel seashells at the bottom of the costume represent those walks.

Despite her illness, Mauryah felt well enough to attend the show and modelled the costume; she received a standing ovation as she walked down the runway.

In support of Wiley and her sister, proceeds from the 2016 show will be directed to the G. Magnotta Foundation for Lyme disease research.

The Visual Merchandising Arts program is a two-year project-based diploma program that provides students with the opportunity to develop design skills and knowledge in the areas of fashion and visual display. Conestoga is the only college to offer Visual Merchandising Arts graduates the opportunity to earn a second two-year diploma in Interior Decorating in just one year.