The Insurance Institute of Ontario’s Conestoga Chapter held its annual convocation at Bingemans on February 25. During the ceremony 15 graduates of Conestoga’s Insurance - Property & Casualty diploma program received their Chartered Insurance Professional (CIP) designations. This designation is the benchmark of insurance professionalism for individuals starting or building a career in the insurance industry. 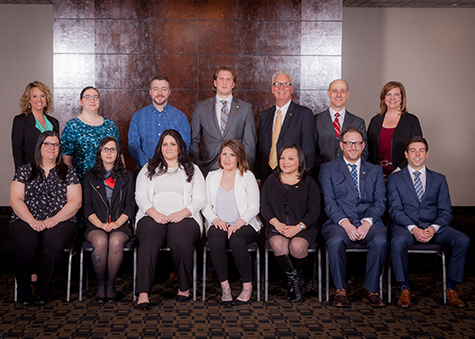 On February 25, fifteen Conestoga graduates received their Chartered Insurance Professional designations from the Insurance Institute of Ontario. Graduates Caesar Martini and Kathy Matte were also recognized with special awards during the event.

Two other Conestoga graduates were also honoured. Caesar Martini, a 2015 graduate, received the Frank Dougan Award which recognizes the top graduate of a full-time insurance program in Canada. Martini graduated with an average of 96% over the course of his two-year program and honours in 8 of his 9 CIP courses. He was also awarded the Donald McKay Award for the highest mark in the Essentials of Loss Adjusting course.

Kathy Matte, a 2014 graduate, received the Peter Vanderkoff Memorial Award, given to the top CIP who is a registered insurance broker.

Both Martini and Matte were named to the President's Honour List at Conestoga - a recognition awarded upon graduation to the student in each diploma, graduate certificate and degree program who obtains the highest average in the program.

“We are very proud of our students’ achievements,” said Glenn Planert, program coordinator. “Close partnerships with the Institute and the local insurance industry mean our graduates are prepared for career success.”

Conestoga’s two-year Insurance - Property and Casualty diploma program provides students with the opportunity to gain nine of the ten credits required for the CIP designation from the Insurance Institute of Canada - a national not-for-profit education and professional development organization that represents more than 39,000 members. It administers the CIP and Fellow Chartered Insurance Professional (FCIP) designation programs for the general insurance industry.