Taylor Jones, a 2010 graduate of Conestoga’s Advertising program, landed the opportunity of a lifetime when he was selected to attend the meeting between U.S. President Barack Obama and Prime Minister Trudeau at the White House’s South Lawn on March 10. 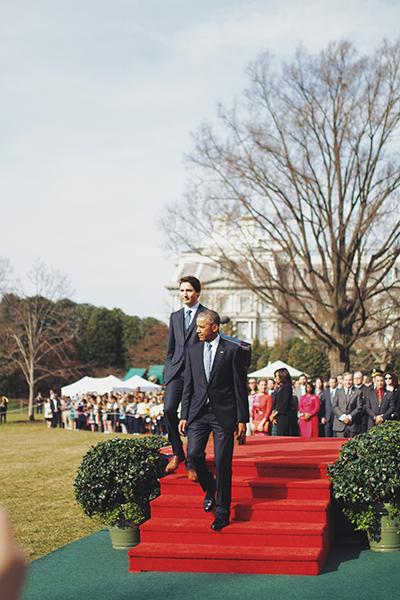 Jones, named as an Alumnus of Distinction in 2014, was invited to document Trudeau’s trip as part of a White House initiative inviting social media "influencers" to attend the ceremony.

Jones is the creator of Dear Photograph, a blog that allows users to post pictures of old snapshots, taken in the same place as the original and held up to the camera to line up with the present day. The nostalgic effect of combining past and present created an Internet phenomenon when the website was launched in 2011. Dear Photograph was named the #1 website of the year by the Early Show on CBS, and among the top ten by Time Magazine. The site was featured by the Globe and Mail, Fox News, CTV National News and The Guardian, among many others, and was the subject of a Swiss art exhibit.

Dear Photograph, a compilation of photos from the project and published in 2012, became a best seller in Canada.

Conestoga's two-year Ontario College diploma program in Advertising and Marketing Communications integrates creativity and planning through experiential learning. Students learn about advertising principles and advertising sales management and develop advertising concepts from idea to finished product. They are also introduced to the principles of public relations, media planning, web design, event planning and entrepreneurship. The program includes a five-week work placement that provides students with first-hand experience as they prepare for careers in the advertising industry.