Students in the Architecture - Construction Engineering Technology program were one of 18 teams to participate in Canstruction Waterloo Region. The event brings together designers, architects and engineers to build unique structures made entirely out of non-perishable food. 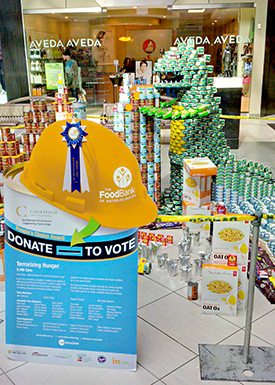 Students in the Architecture - Construction Engineering Technology program used 3,500 pieces of non-perishable food to build a Godzilla-themed display at Conestoga Mall. The build was part of Canstruction - a community event to collect food and donations for the Food Bank of Waterloo Region.

This was the ninth year Conestoga participated in the event, which supports the Food Bank of Waterloo Region. Teams used about 30,000 lbs of food for their sculptures which will be donated to people in need throughout the region.

“It speaks very well for the students to give back to their community,” said faculty member Jim Gerard. “They are all very busy now with school and assignments so for them to take time to fundraise, design the structure and do the build shows commitment to something other than just an education; it is also about doing something for someone else.”

This year, Conestoga’s team of 28 students raised $4,200 and put it towards the purchase of 3,500 cans of food. After brainstorming and narrowing down their ideas, the team decided to “stomp out hunger” by designing a Godzilla-themed structure with the cans. The build took place at Conestoga Mall on Friday, March 11 and will be on display until de-Canstruction begins on Sunday, March 20.

Conestoga’s structure was recognized with an Honourable Mention after a team of judges drawn from engineering, graphic design and construction fields assessed the creations. The public is also invited to participate by viewing the structures and donating money to vote in favour of their favourite build. The design with the most financial support will win the People’s Choice Award. Every dollar raised through voting will provide three meals for people in need.

Visit CTV News for highlights of this year’s entries.