On February 11, Conestoga hosted the Domestic Assault Review Team (DART) of Waterloo Region for a panel discussion on domestic violence. The discussion, held at the Doon campus, was presented to an interprofessional group of students from the Practical Nursing, Social Service Worker and Community Safety programs. 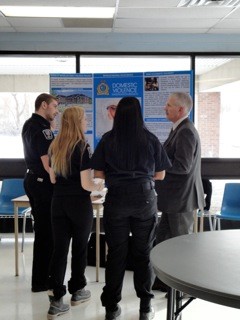 DART is a collaboration of community agencies that work together to enhance the safety of individuals experiencing domestic violence. This was the third year Conestoga hosted the panel -- it's an event that grew out of a field trip faculty member Linda Juodvalkis used to make with her students in the Violence, Abuse and Neglect course. As the class became too large to accommodate offsite, Juodvalkis invited DART members to attend Conestoga and expanded the number of students involved. The event includes eight to ten DART panelists that speak about their agencies and 10 to 12 information booths set up by local agencies for students to visit.

“It’s helpful to know what resources are available and to have information about each of them in one spot," said Carolyn Green, a second year student in the Social Service Worker program. "I think it’s also helpful to know the panelists are partners; they can refer you to other agencies if a client you're working with needs additional resources." Green was also surprised by some of the statistics shared during the discussion.

Staff Sergeant Greg Fiss of the Waterloo Region Police Service said the Domestic Violence Investigation Unit responds to 6,000 calls per year, noting that less than one third of domestic violence incidents are reported. He stressed the complexity of the issues involved with each call and reminded students they all need to participate in finding solutions as they go forward in their careers.

Bobbye Goldenberg of the Family Counselling Centre of Cambridge and North Dumfries also provided perspective for students: "In the work you have chosen you will encounter domestic violence at least three times during a five-day week. For those of you in policing, that number will be higher."

Following the panel discussion students had an opportunity to visit the information booths and speak with agency representatives one-on-one.