Dylan Horst, a 2015 Woodworking graduate, was recently named this year's winner of the Young Wood Pro contest by the editors of Woodworking Network. The contest was part of Young Woodworking Professionals Week and was open to woodworkers between the ages of 18 and 35. 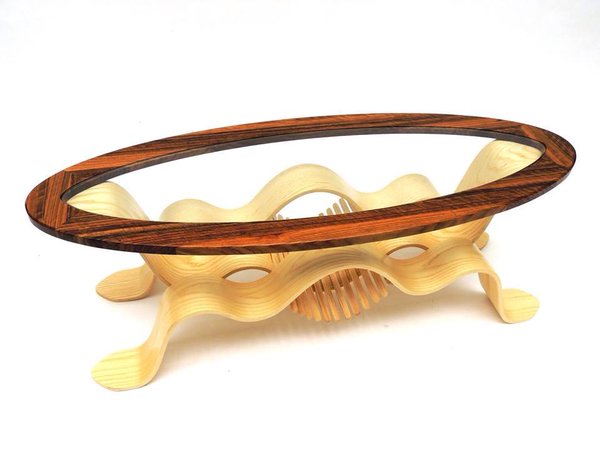 As part of his award, Horst will be profiled on the Woodworking Network website and in its print publication, both of which target professional woodworkers in North America. He will also be recognized at an industry event - Cabinets & Closets 2016 - next March in Pasadena.

Horst’s entry into the contest was a coffee table he designed and built for his final-year capstone project at Conestoga. Designed using AutoDesk and AutoCAD software, the table is made of wenge and ash and its base features a unique wave pattern.

“I wanted a contrast between the top and base, so I chose the ash and then came across the wenge which I thought would work really well,” said Horst. “The wave pattern was created using 24 layers of veneer that were shaped using a jig.”

Horst’s table was recently on display for the duration of the Woodworking, Machinery and Supply (WMS) conference held in Toronto from November 5 to 7. Billed as Canada’s largest woodworking event, the conference hosted more than 250 exhibitors and welcomed more than 4,000 attendees.

“Winning the contest was great and I was happy to attend the conference,” said Horst. “I actually received a few job offers - some from local companies and others from companies in Toronto.”

Horst, also the winner of Conestoga's 2015 Spring Mastercraft award, said he’ll likely hold on to his prize-winning table, but will consider reproducing it for an interested buyer; he’s been told it could easily retail for $4,000.

The Woodworking Centre of Ontario is a 50,000 sq.ft. facility at Conestoga that ranks among the world’s top woodworking training centres. Students have access to custom woodworking and production training as well as the latest in Computer Numerical Control (CNC) and drafting technology. For more information, visit the Centre's website.