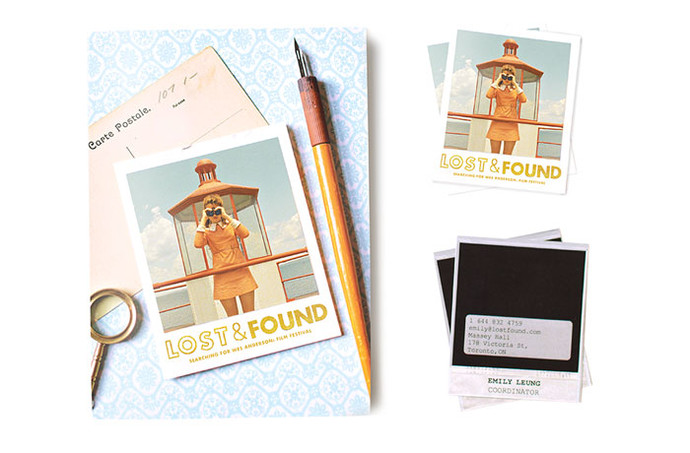 Conestoga graduate Emily Leung won the RGD Award of Excellence for Western Ontario. Three pieces of her work were judged, including the material above, which Leung created for a hypothetical film festival for director Wes Anderson, titled Lost and Found.

Following its call for entries, RGD received student submissions from across Canada. Graphic Design graduate Emily Leung received the Award of Excellence for Western Ontario while Matthew Piotrowski, also a Graphic Design graduate, won a specialty award for brand design. In total, RGD presented six awards of excellence and 11 specialty awards totaling $17,000 in cash prizes. Submissions were judged by a jury of 50 design professionals representing a range of expertise.

Leung and Piotrowski were each awarded $1,000 cash prizes and will have their work featured in a catalogue to be distributed with Applied Arts magazine. Their work will also be part of the Student Awards Exhibit at DesignThinkers (Canada’s largest conference for visual communicators) to be held at the Sony Centre for the Performing Arts in Toronto on November 12 and 13.

"This was a tough year for judging. There were over 250 excellent submissions, winners and non-winners alike, from across the country,” said Karen Satok, RGD's vice president of education. “It was hard to make a final decision. Everyone who submitted should be proud of their accomplishments and the effort taken. Congratulations to all.”

The student submissions and the resulting success can partly be credited to a course assignment. Third-year students in Conestoga’s Graphic Design advanced diploma program are required to research and enter two industry contests. As part of the assignment they must research the competitions, identify new professional practices, reflect on their portfolio of work and select their best projects for entry. Specific requirements of this course and the program's process for student awards were documented in a case study prepared for RGD this past July by department of Graphic Design faculty members John Baljkas and Molly Hill.

Since 2010, these student contest submissions have received over 50 awards and acknowledgements for various competitions.

The full list of RGD's 2015 student award winners, along with samples of work, can be found here