On Saturday, September 19, members of Conestoga’s student chapter of the Institute of Electrical and Electronics Engineers (IEEE) participated in the region’s first Maker Expo at Kitchener City Hall. “Makers” are part of a growing community of people who create things; interests range from electronics and robotics to gardening and crafts. 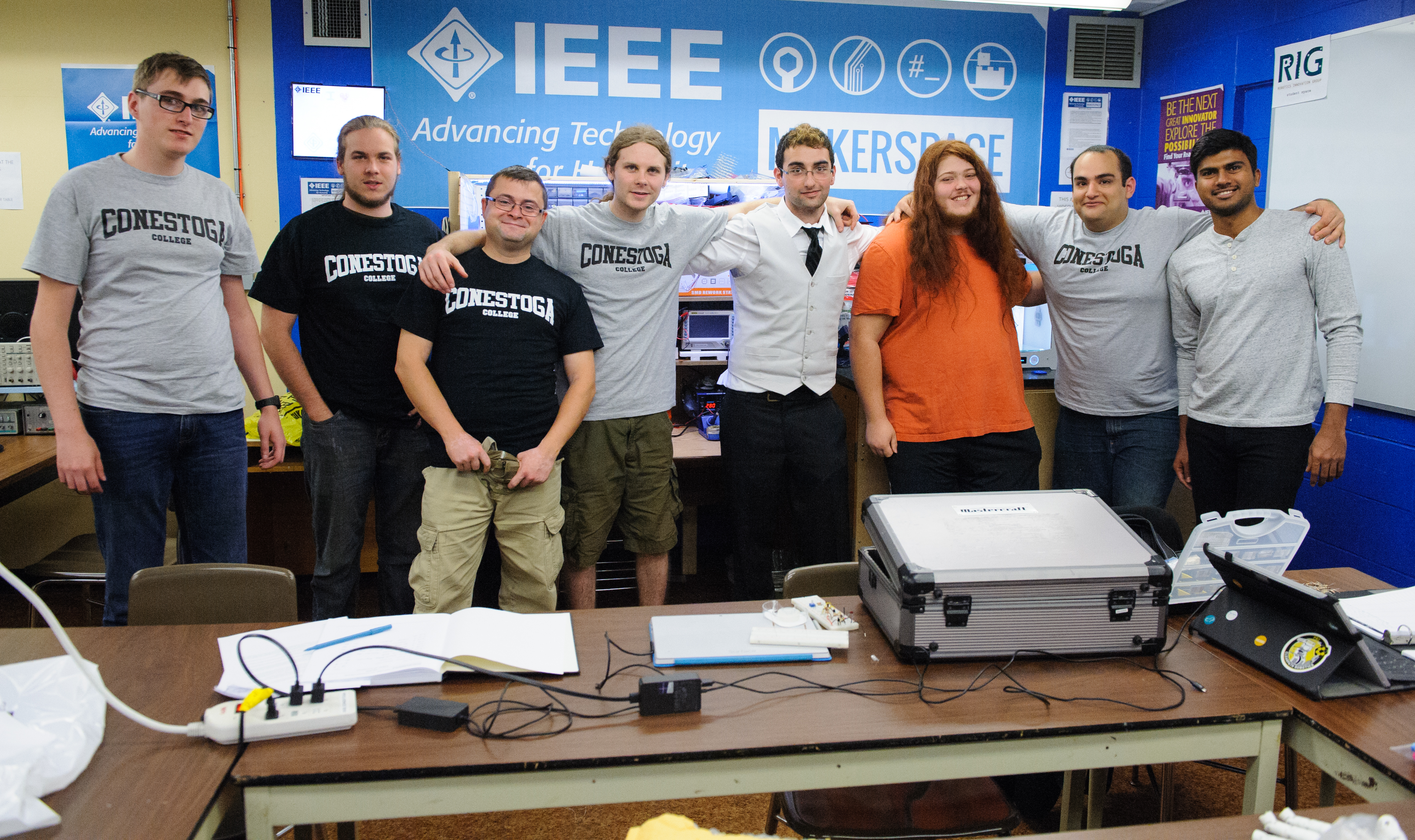 The event drew 7,500 attendees and featured over 100 exhibitors -- a mix of individuals, groups, teams and organizations -- that shared ideas and creations through interactive exhibits, demos and workshops. The Conestoga team displayed a humanoid robot arm, created from a 3D printer. It’s a project they have worked on outside of class time, using skills developed in their Software Engineering Technology (SET) and Computer Engineering Technology (CET) programs.

“Kids loved our display,” said Roger Bongers, a CET student who said the Conestoga table had a steady stream of visitors. “They have a real interest in robotics and technology and said the sensored glove we displayed reminded them of Iron Man.”

SET student Verdi Rodrigues-Diamond, who also worked at the Conestoga display table, said the maker movement has been growing. “The movement is an interesting phenomenon that started about six or seven years ago,” he explained. “Instead of individual basement workshops, people come together to build something significant. By creating community spaces, everyone has access to bigger and better tools. Originally the maker movement was more geared to electronics, but now it’s not at all specific. It can include woodworking and various arts and crafts.”

These community spaces are funded through member fees, but CET student Tarek Rahim, Conestoga’s IEEE president, likened them to a gym membership. “Rather than buy your own expensive equipment, you pay a small membership fee and have access to a whole range of equipment,” he said.

Conestoga’s IEEE chapter has worked hard over the last year to increase its membership and create its own Makerspace. Rahim said there was a membership of 20 people at the start of last year and that has since climbed to 70. “We are the fastest growing branch in Canada and we have a goal of 100 members by the end of 2015,” he noted.

The chapter is also the most active in the region, participating in a range of events like the Robot Operating System workshop and coordinating events for National Engineering Month.

Conestoga’s IEEE members are required to pay a membership fee, but this grants them access to the Makerspace which features an Ultimaker 2 3D printer and a workstation stocked with tools and accessories.

“During peak hours there could be 20 or more students in the lab,” said Rahim. “The 3D printer has attracted many members. You can print anything you’d like and this is a huge sell.”

The printer was purchased with grants the IEEE acquired. The lab also features a small library of textbooks that have been donated. Students find the library helpful and are welcome to sign books out.

Rahim added that members are taught how to use equipment and get a say in what equipment is purchased. As its membership grows, the group hopes to acquire a function generator and is eager to acquire a second 3D printer.

The IEEE lab is located in 2A315 and invites students to drop by if interested in membership.