Conestoga students presented their software creations at the annual Software Engineering Technology capstone project showcase held in the Sanctuary at Doon on April 24.
Projects ranged from a stove that users can control with their smartphone to an app that helps students arrange carpools to and from the campus. Students presented their products to members of the public before taking to the stage to give a formal product pitch to a panel of industry judges.

For Allin, the idea came from a toy that he used to play with as a child. 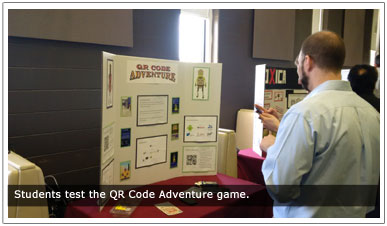 “We were looking at the barcode battle toys that we had as kids and wondered why you don’t see them anymore,” said Allin. “We brainstormed an idea around mobile phone features and we came up with the idea of using QR codes for an RPG battle game.”

Allin has always been interested in software development, but only recently made the decision to come to Conestoga to pursue his interest.

“I went to university and I have a degree in religious and culture studies. I have been a carpenter and I have worked in computer repair,” explained Allin. “Software development was always a hobby and everyone told me I should pursue that as a career.”

Allin said that the program at Conestoga was an easy choice.

“I decided to come here because Conestoga provides a lot of hands-on experience,” stated Allin. “It’s hard to find that somewhere else.”

While the game isn’t quite ready to go through the certification process in order to be added to the Android store, Allin said his group encourages users to download the APK (Android application file) from their website, RobotMonocle.com, to help their group test the software.

After graduation, Allin will begin work as a Software Developer at BlackBerry, the company where he completed his co-op term during his studies. He is excited to get started.

“I think this is the first job I have had where I don’t need to spend time outside of work doing the real things I like.”