Conestoga honours 2014 Athletes of the Year

Conestoga’s 2014 Athletes of the Year were honoured at the college’s annual athletic banquet held on April 8 at Conestoga Place in Kitchener.
Brieanne Gallant, a Kitchener native, is a first-year student in the General Arts and Science - Health Option program. A libero on the women's volleyball team, she played all 18 matches for the Condors this season, leading the OCAA with 342 digs. Gallant was selected by the OCAA as Women’s Volleyball Rookie of the Year and was named to the West Division First-Team All-Stars. She also played on the West Division All-Rookie team. According to Coach Marek Gwodzdz, Gallant "has the will to win and thrives in competition". 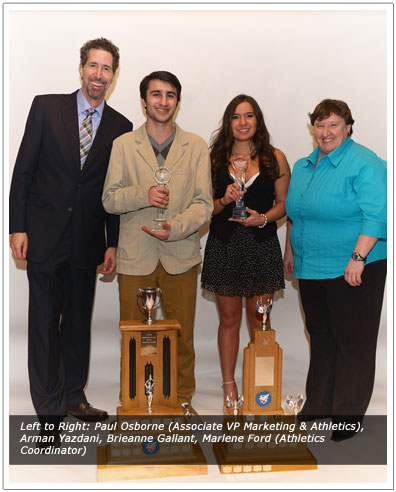 Arman Yazdani from Lindsay, Ontario is a second-year rugby player enrolled in Conestoga’s Civil Engineering Technology diploma program. Yazdani plays as a fullback and was instrumental in leading his team to the OCAA bronze medal. He was named to the Men's Rugby All-Stars team and his team's most valuable player.

Coach Kyle O’Neill described Yazdani as “the smallest guy on the pitch, yet the most fearless player I have ever coached. He doesn’t miss a tackle and he saved us many times by completely disregarding his own body." According to O’Neill, Yazdani “exemplifies what it means to be a Condor."

The 2014 Atletes of the Year each received a school ring and a $500 scholarship in recognition of their athletic leadership and accomplishments.